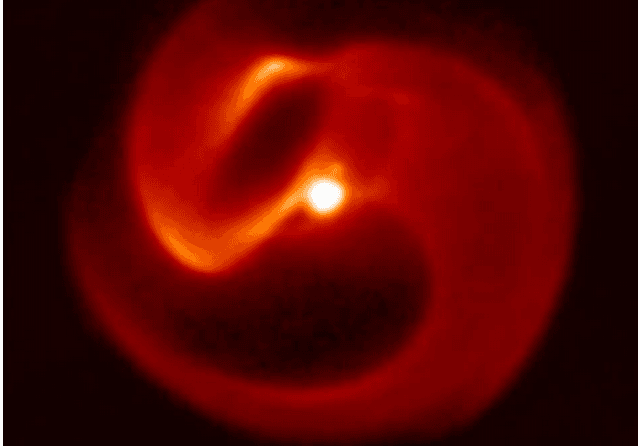 This is an image of Apep captured at 8 microns in the thermal infrared with the VISIR camera on the European Southern Observatory\’s VLT telescope, Mt Paranal, Chile ( Peter Tuthill/University of Sydney/ESO )

The Astronomical Society of Greenwich  will be holding a talk by Dr. Benjamin Pope, NASA Sagan Fellow, Center  for Cosmology and Particle Physics, New York University, on September  22, at the Audubon Center in Greenwich (Gallery) at 3:30pm.

‘The  Dancing Dragons of Apep’. This talk is a free event and open to the public.

Wolf-Rayet stars are thought to be the last stage of the evolution of the most massive stars before they explode as supernovae. Some of these, if they are rapidly rotating when they explode, give rise to gamma-ray bursts, the most energetic blasts known to science. Wolf-Rayet stars often occur in binaries, usually with O star companions, in which the powerful winds of the stars collide and form red-hot dust that streams away in pinwheel spirals, whose geometry encodes what is happening in the binary.

Dr. Pope will show a recent discovery of a spectacular system, dubbed ‘Apep’, which is the only confirmed binary in the Galaxy consisting of two Wolf-Rayet stars, and is probably the second-brightest binary star system in the galaxy.

Remarkably, investigations have turned up evidence that at least one of the stars might be a rapidly-rotating gamma ray burst waiting to happen – a loaded gun right in our own Galaxy where none were previously known.