A captivating collection of historic memorabilia and first-person
accounts from Jewish residents of Greenwich chronicles the untold story of Greenwich’s Jewish community dating to the turn of the last century.   The Greenwich Historical Society’s landmark exhibition, An American Odyssey: The Jewish Experience in Greenwich, which opens on November 15, examines how Jews, like other immigrants, struggled with the pull to integrate into American society and yet also remain distinct.

Their significant contributions to the cultural and economic vitality of Greenwich, despite their humble start, low numbers and periods of discrimination and restrictions on worship, employment and housing opportunities, are explored.

“This is among the most significant exhibitions in the history of the Historical Society,” said Debra Mecky, executive director. “Despite its relatively small but growing population, the Jewish community has had an outsized influence on Greenwich. Many of the stores on Greenwich Avenue were established by Jewish immigrants who came here from Eastern Europe with little or no money.”

Mecky said that from their humble beginnings as street peddlers, they helped shape our thriving retail sector. Many Jewish families have made their mark through generous philanthropy that has contributed enormously to the town’s vitality. Their story is integral to understanding Greenwich’s legacy and prominent stature in the United States.”

Until now, there has been no comprehensive look at the history of the Jews of Greenwich. This exhibition aims to rectify that by exploring how Jews contributed to our community despite experiencing periods of discrimination through restrictions on worship, employment and housing opportunities.

When the Cohens, Weisses, Markses, Bennetts, Taylors and Tunicks decided to settle in Greenwich, they established small businesses and became pillars of the Jewish community, ultimately building today’s Temple Sholom. Their family treasures tell the story of why and how their forebears made the decision to come to Greenwich at the beginning of the 20th century. The exhibition features several precious artifacts generously lent by these families and also includes moving audio recordings of their journeys as told by family descendants interviewed in the 1970s as part of the Greenwich Library Oral History Project.

Employing photos, objects, ephemera and personal accounts, An American Odyssey unfolds in seven parts. Its preamble focuses on a Jewish family who, surprisingly, owned our own Bush-Holley House for a few years during the Colonial period. It then leaps forward to the mass migration from Eastern Europe at the end of the 19th and early 20th centuries. Next come the stories of the six founding families set in the context of the town in which they decided to put down roots, followed by the founding of Temple Sholom in 1916 (known as The Greenwich Hebrew Institute until 1955), the intensification of anti-Semitism in the 1930s and 40s with a special look at Jewish soldiers from Greenwich who fought in World War II, and finally Jewish life in the postwar period, which brought a new wave of businesses, synagogue growth, diversity and Jewish philanthropy.

Among the items featured in the exhibition are a samovar brought over from Russia by Sarah and Barney Tunick, an original shoe box and salesmen’s measuring tools from The Favorite Shoe Store, started by I. J. Weiss in 1909 (some in town may still remember shopping in this store), a WWII uniform of a Jewish soldier from Greenwich, and a Torah cover and ornaments from a Holocaust Torah donated to Congregation Shir Ami.

The Jewish Experience in Greenwich Timeline

1880 – 1919 23 million Europeans sail to America. Two million are Yiddish speaking Jews. Most arrive in Greenwich from Russia/Poland through Port Chester. 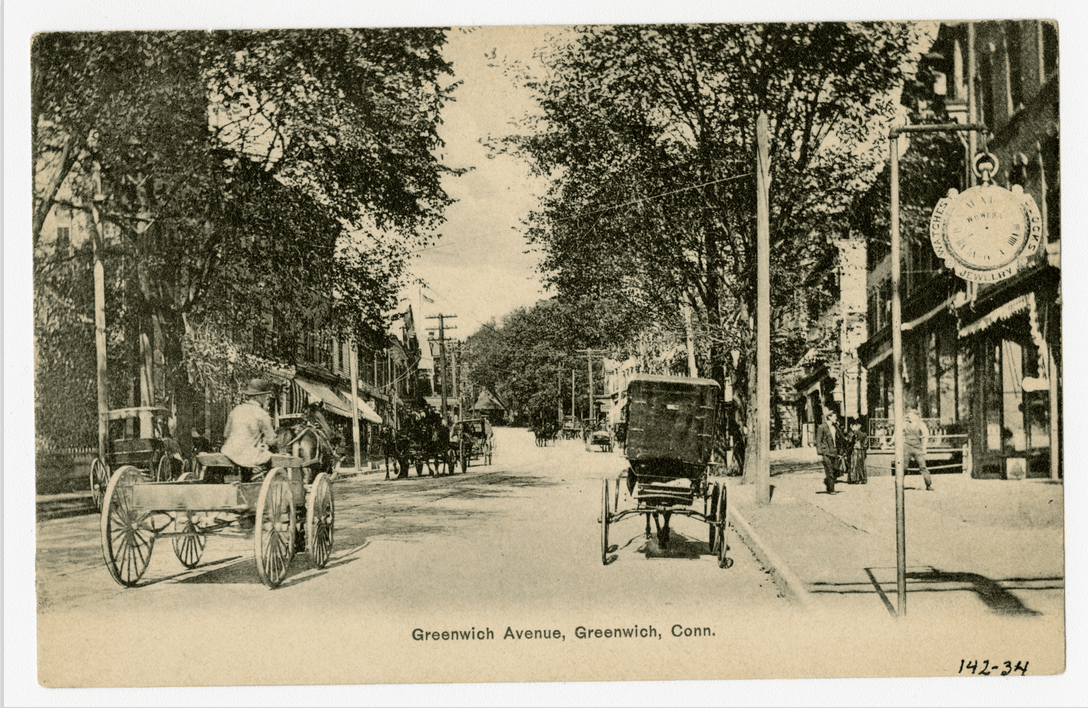 1916 The first Jewish congregation, “The Greenwich Hebrew Institute,” is established in rented space on Greenwich Avenue.

1924 – 1940s Anti-Semitism intensifies beginning with passage of the 1924 Johnson-Reed Act,which institutes a national origins quota on immigration, targeting Southern andEastern Europeans, particularly Italians and Jews. At the same time, the Ku KluxKlan was in ascendance and Henry Ford’s and Father Coughlin’s anti-Semitic propaganda was gaining widespread popularity. This continued through the 1930s and 1940s.
1940s Greenwich Jews fight in WW2.

1955 Cornerstone laid for Temple Sholom, the former Greenwich Hebrew Institute, which opens in 1956.

1976 Greenwich Reform Synagogue is established, meeting at Diamond Methodist Church in Cos Cob; moves to Stanwich Road in 1992 and a new building on Orchard Street in 2017. 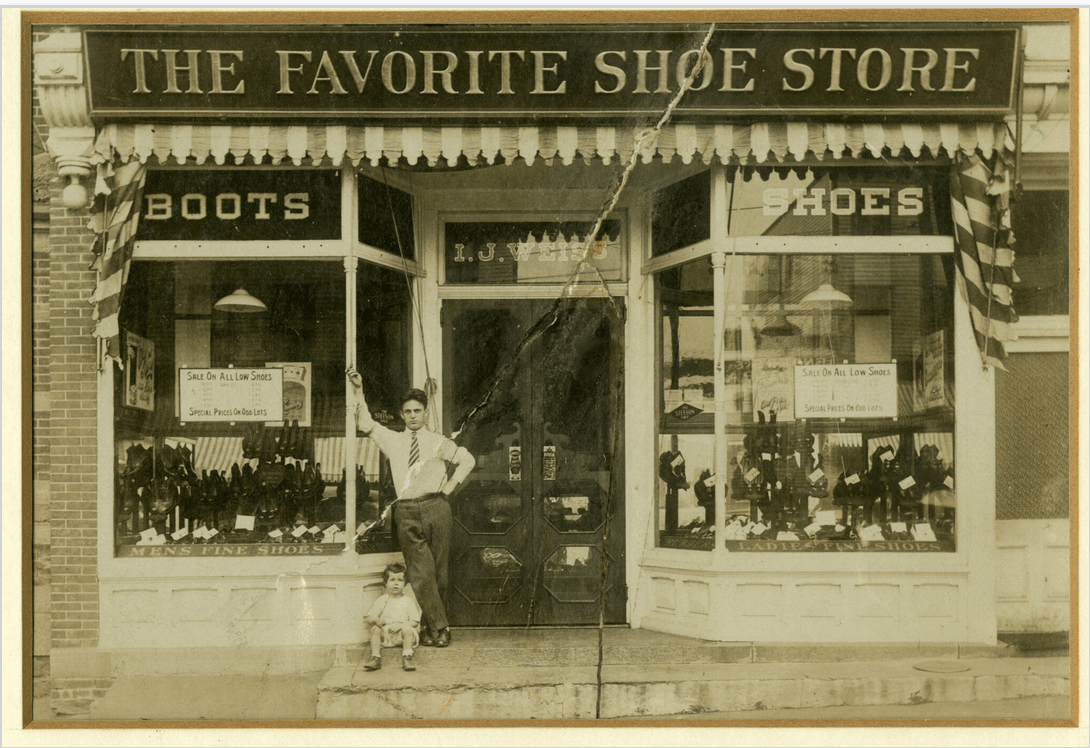 The Favorite Shoe Store opened at 92 Greenwich Avenue in 1914 during the first wave of Jewish immigration and remained open for 91 years.” Photo courtesy Greenwich Historical Society