Marjorie and Guy Smith opened their North Street home and splendid gardens during the Sunday, June 4 Grandiflora Garden Tour 2017, a fundraiser for the Garden Education Center.

Hundreds passed through their home at 352 North Street, affording the Smiths an opportunity to share their ideas about accessible gardens.

“I’m privileged to be a steward of this property,” Marjorie said. “I’m happy to be able to share, especially with people in assisted living.”

“If you’re in a wheelchair or a walker, you can go into every room and enjoy the views,” Mrs. Smith said, adding that some visitors during the garden tour were walking with the assistance of canes.

“You move into a house, and then one person becomes infirm. People just move out,” Marjorie said, adding that with the addition of handrails, electric stair riders and grips can mean the difference between selling a house and remaining in a longtime home. 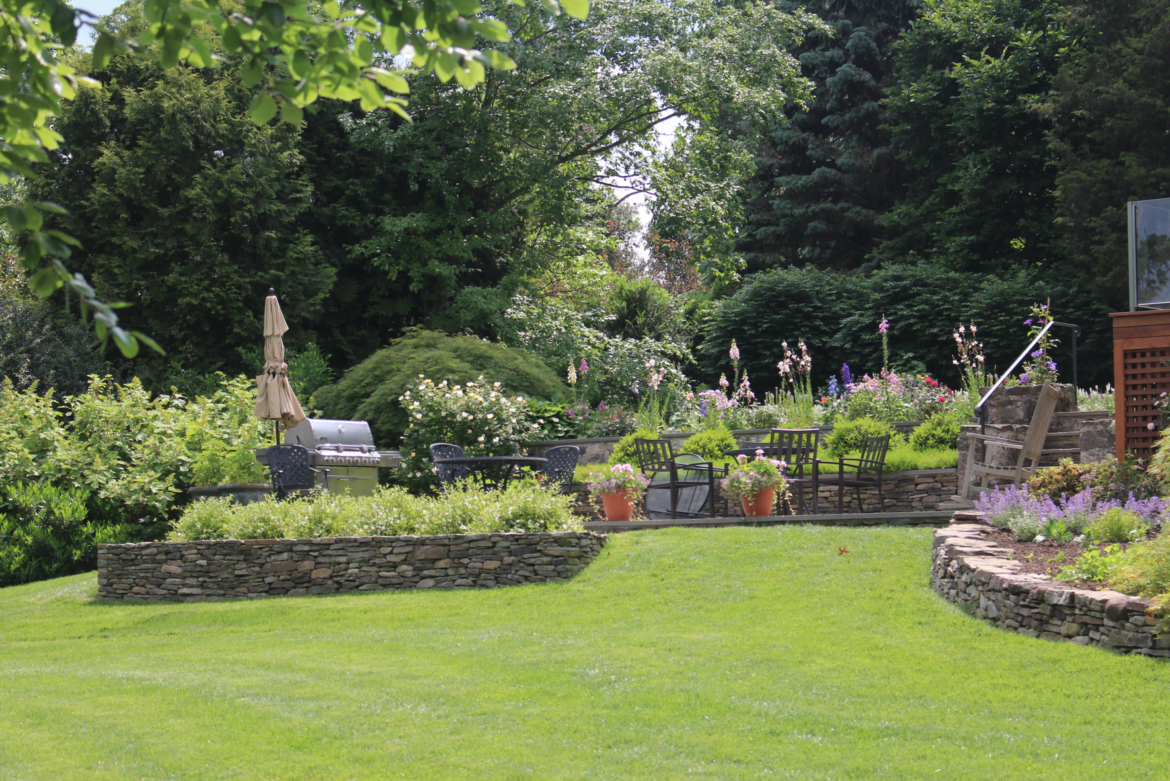 In fact, just in time for the garden tour, Marjorie said, a newly planted June Perennial Border was created by Matt McMillan.

“He is very creative, perceptive and talented,” Marjorie said of McMillan, the designer she met through a visit to Sam Bridge Nursery, located nearby on North Street.  Mary Jo Bridge Palmer and  her husband Rich were in attendance during Sunday’s garden tour. 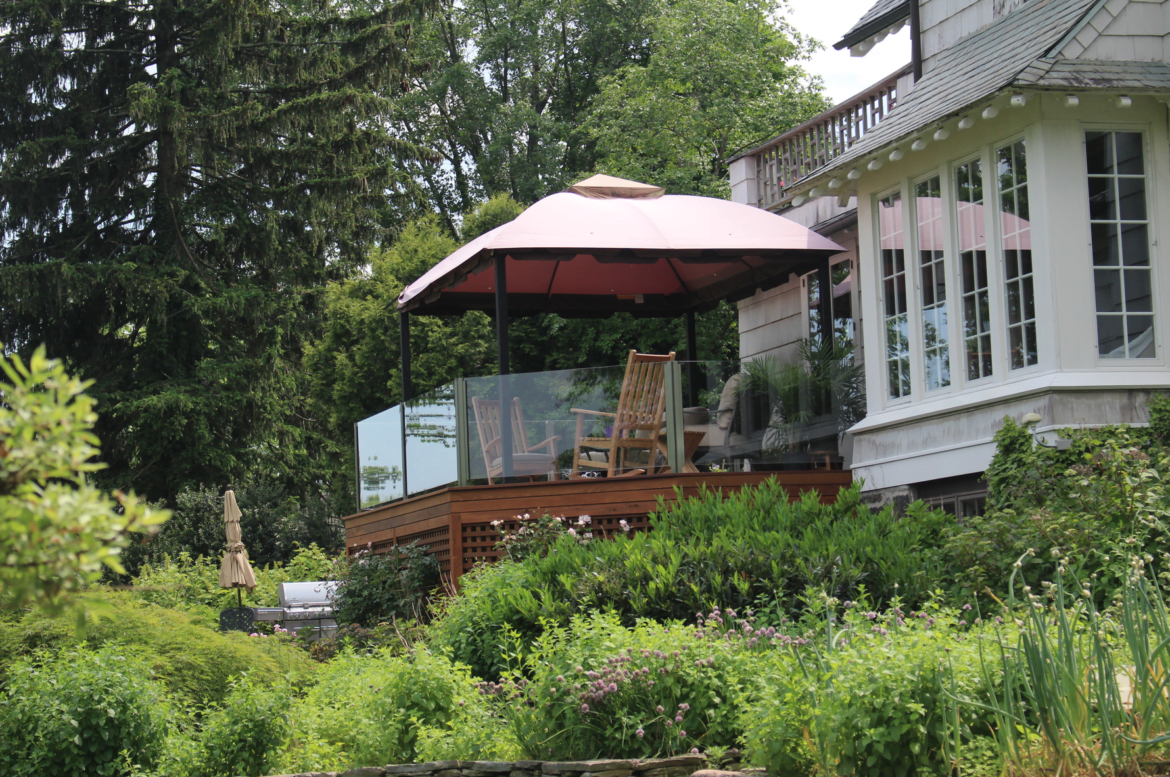 The tempered glass-sided deck is not only accessible by wheelchair but affords tremendous views. June 11, 2017 Photo: Leslie Yager 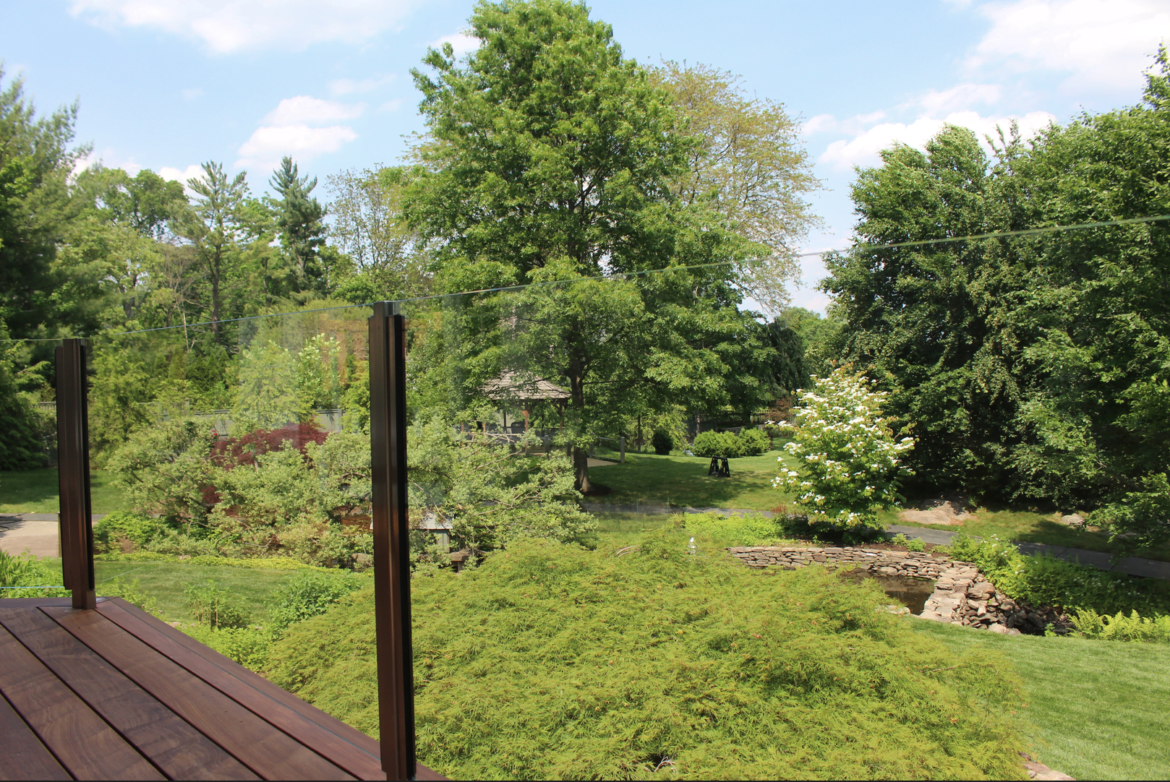 The glass sided deck is not only accessible by wheelchair but affords tremendous views. June 11, 2017 Photo: Leslie Yager 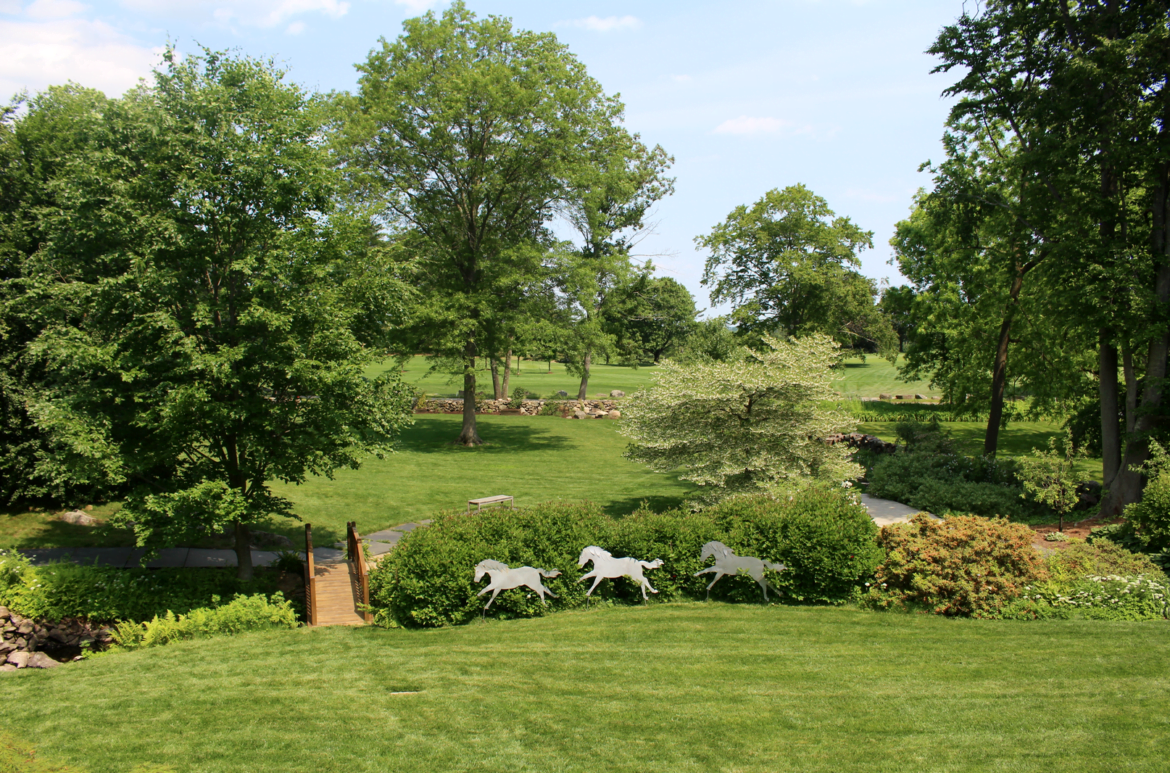 Marjorie and Guy have been in their charming 1904 house for 33 years and they intend to stay.

Toward that end, the couple made their extensive gardens and vistas accessible by creating paths with gentle ramps.

In lieu of steps and stairs, they topped the ramps with horse stall mats, which Marjorie said are available to purchase from tractorsupply.com.

The horse stall mats offer a safe grip for wheelchairs and walkers. And, Marjorie pointed out, the mats are inexpensive and easily cut to fit along curves. 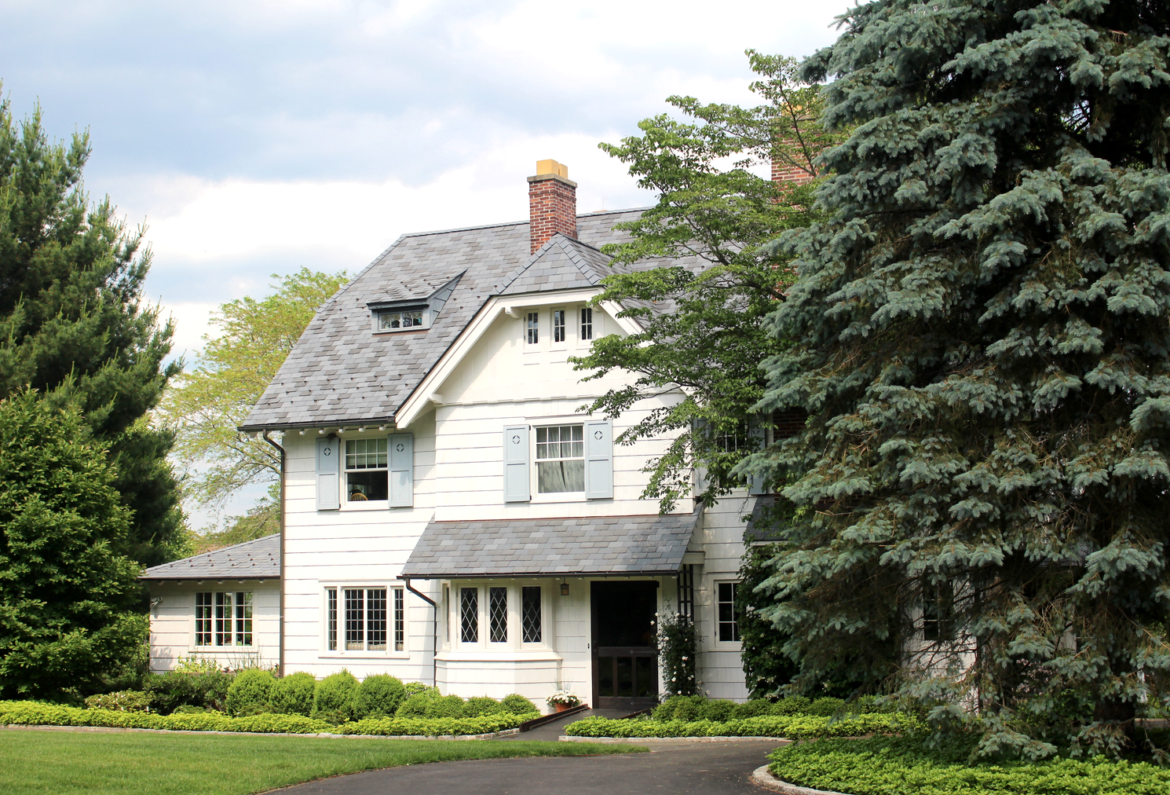 It is possible to meander along the garden paths, traverse bridges and take in breathtaking vistas reminiscent of New York Botanical Gardens – all without a sense of climbing or descending, as the grade is ever so gentle.

“You can access all the gardens in a wheelchair,” Marjorie continued, adding that garden tour visitors didn’t even notice the lack of steps until it was pointed out to them.

The impetus for the transition to the meandering step-free pathways was the arrival of Marjorie’s mother who uses a walker to get about, and the desire for her to be able to enjoy the gardens.

“During the garden tour people kept asking about how we made everything accessible,” Marjorie said.

“Everyone gets frustrated when someone gets injured and they jump to make decisions,” Marjorie said. “It’s all about accessibility.” 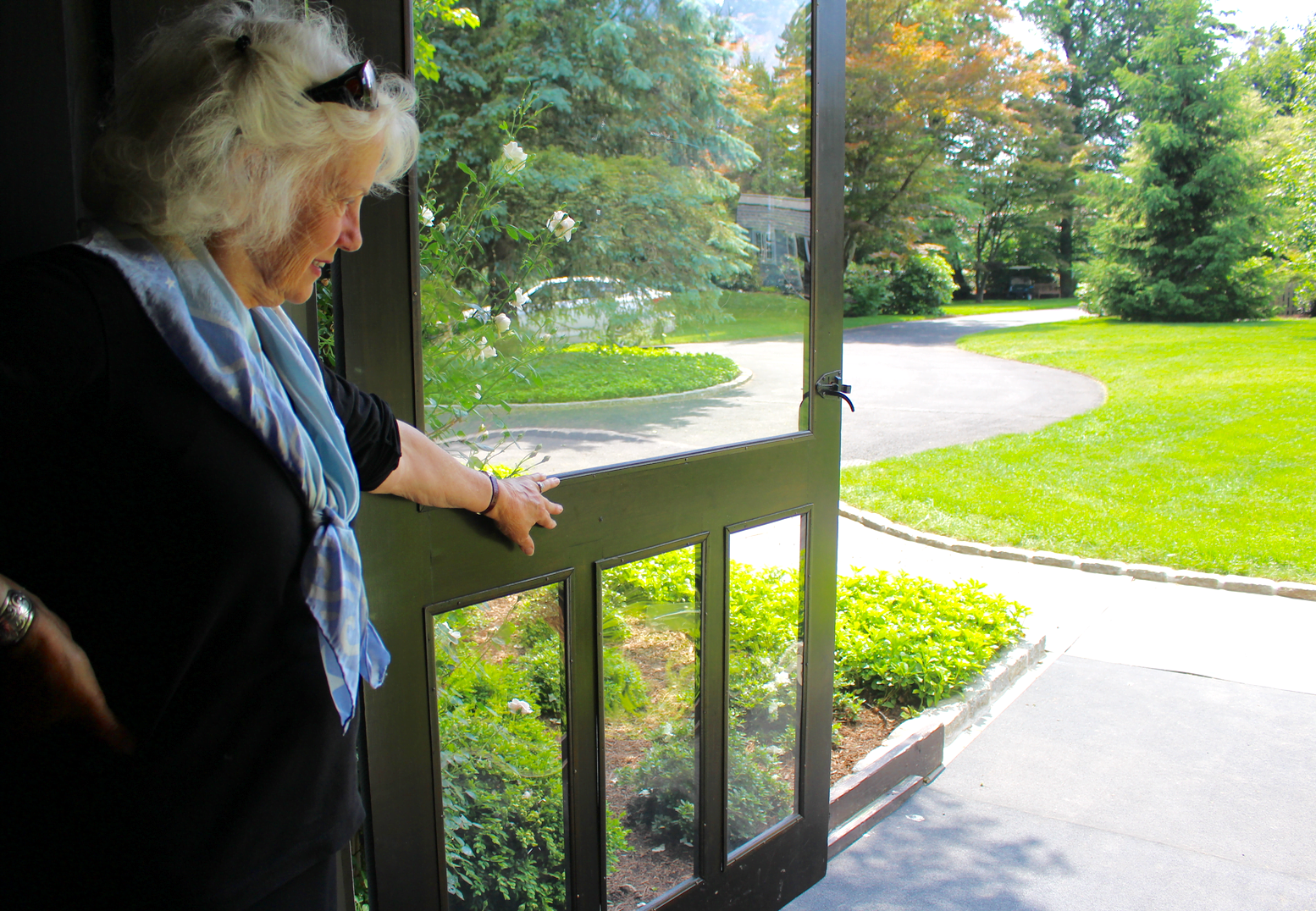 Exiting the house along a horse stall mat covered ramp that ever so gently, leads to the garden path. June 11, 2017 Photo: Leslie Yager

Inside the Smith’s home, room after room is enhanced with bountiful views.

“My goal was to go with the flow of the land and what was there 125 years ago, and emphasize the vistas,” Marjorie explained. “You come around a corner and are met with a surprise.” 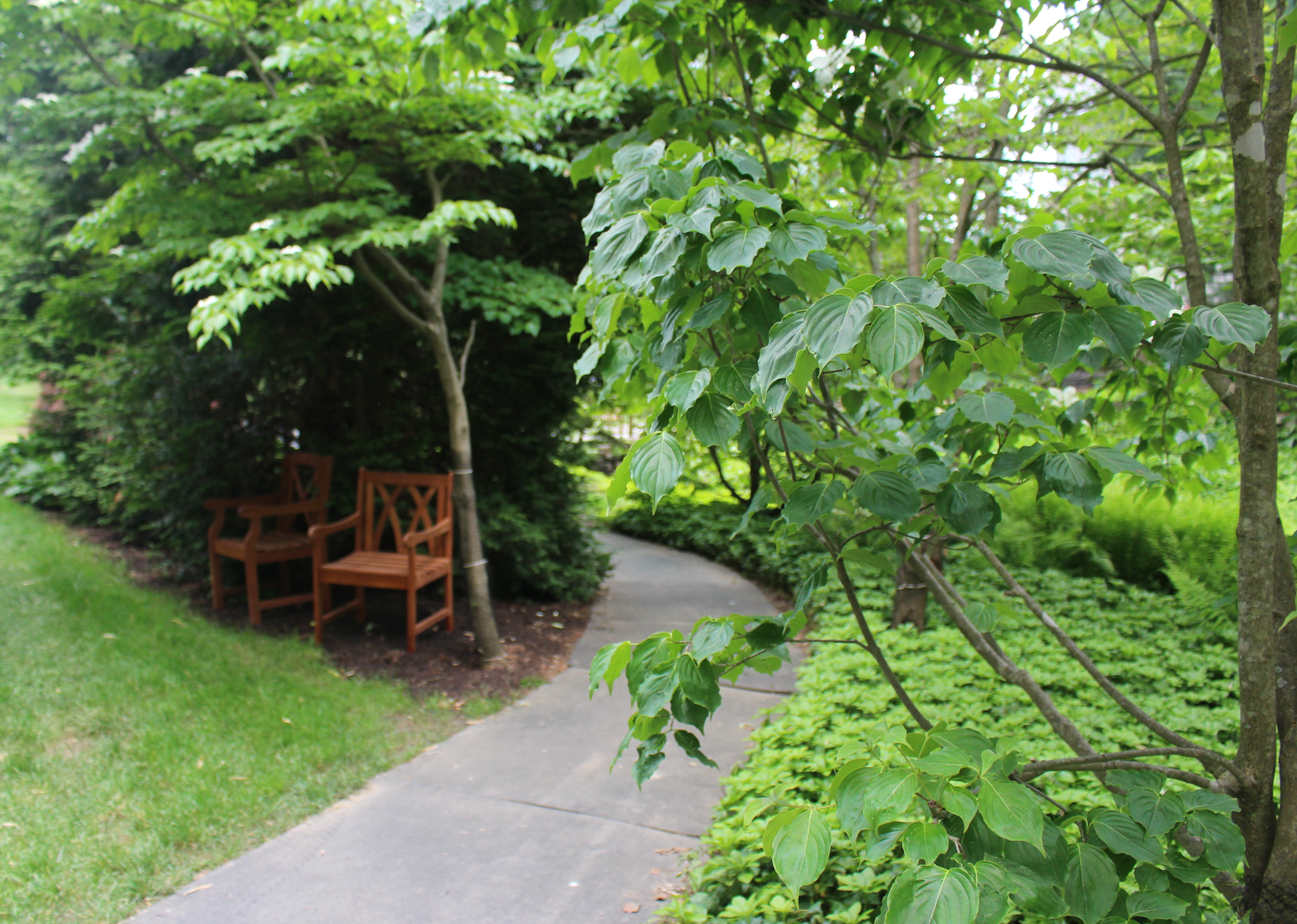 A horese mat covered pathway originates at the front door of the Smith house and heads down a slow slope. June 11, 2017 Photo: Leslie Yager

The Smiths extended the idea of the glass-sided deck to a portion of the fence between them and their neighbors, installing a section of clear plexiglass. “That way the neighbors can also enjoy the views,” Marjorie said. 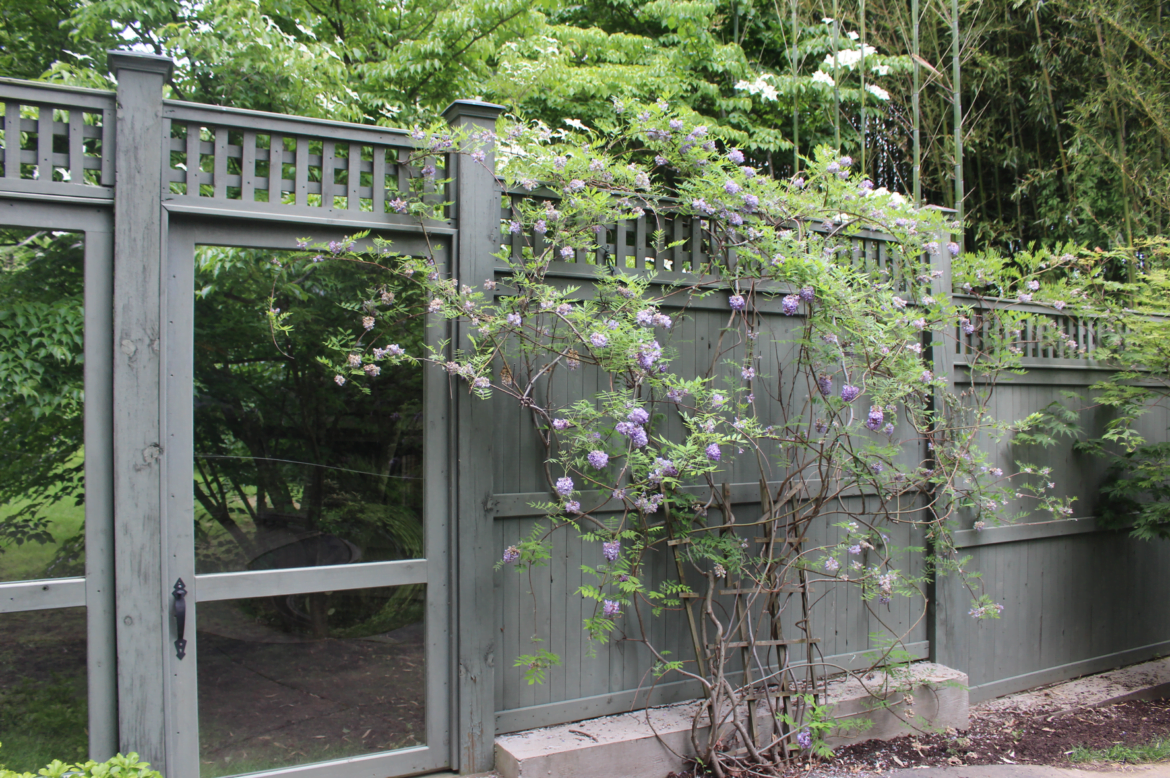 Section of fence where plexiglass affords neighbors views of the Smith property and beyond. June 11, 2017 Photo: Leslie Yager

The Smiths took the sharing concept to the next level during the Grandiflora event, to which 375 tickets were sold.

A small handwritten note penned by Marjorie alerts guests to an unparalleled view of a meandering stream, swaths of lawn, and majestic trees.

Placed on a railing along a bridge that spans a brook, the note says, “Best view in Fairfield County, my husband says.” 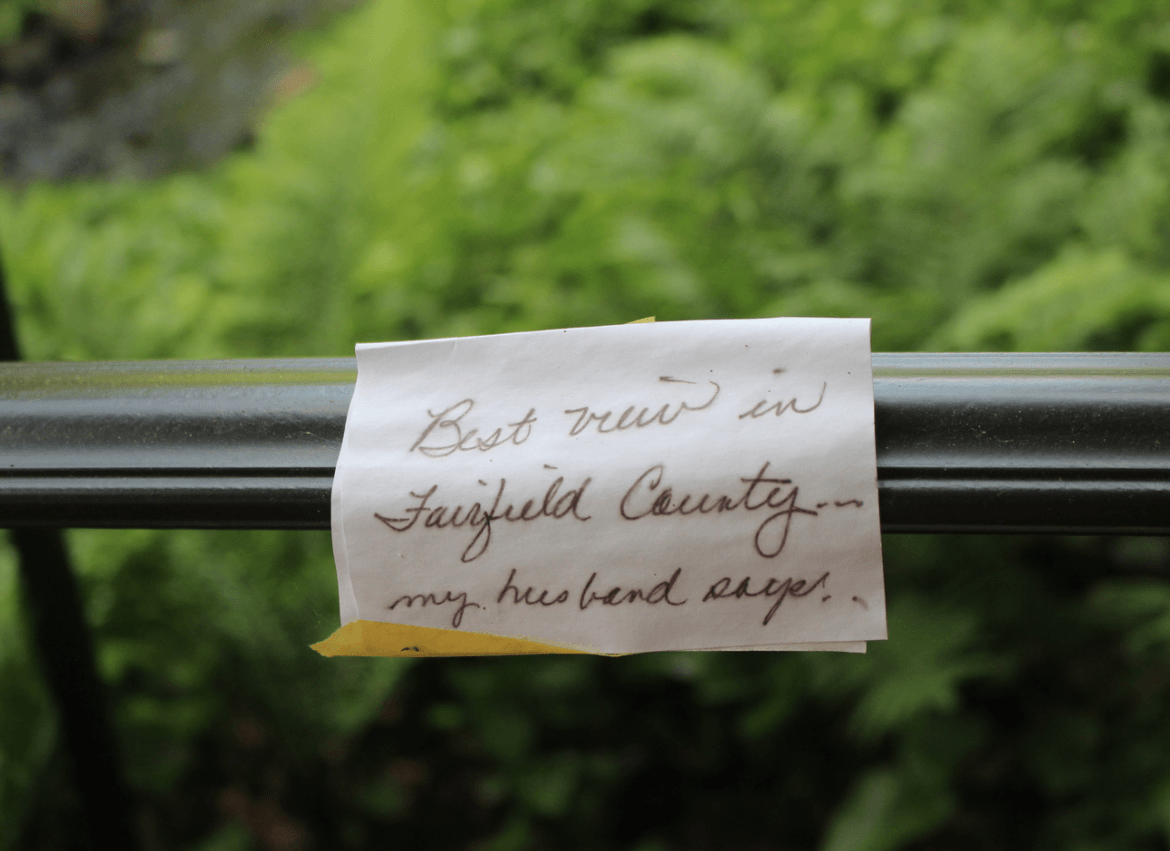 Along the the Smiths’ garden pathway, a hand written note alerts guests to a spectacular view from a bridge. June 11, 2017 Photo: Leslie Yager 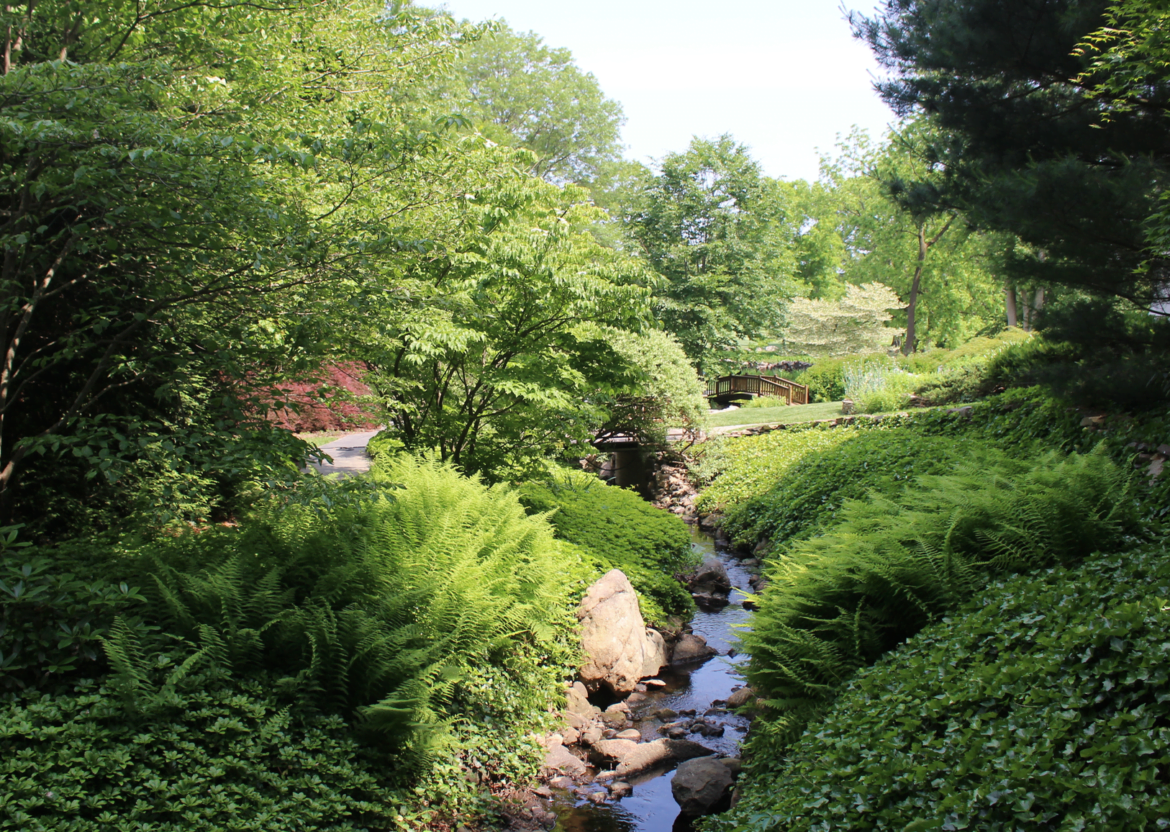 Superlative view from the Smiths’ garden path features bridge and old trees in the distance and beds of Pachysandra and Hay-scented ferns in the foreground. June 11, 2017 Photo: Leslie Yager 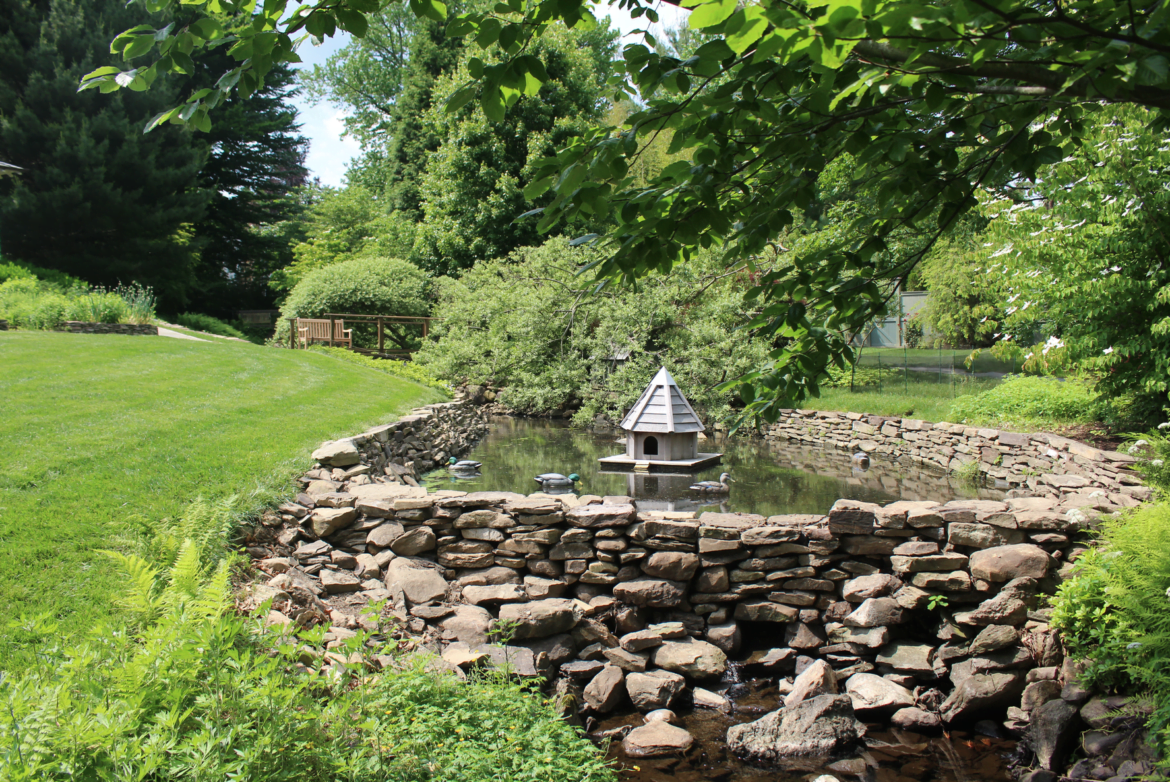 View from one of four bridges on the Smith property features ducks, frogs and floating house for ducklings. June 11, 2017 Photo: Leslie Yager

Moving along, guests pause to hear frogs croaking and watch ducks paddling in a pond that the stream passes through.

“We hope some visitors will be able to successfully use some of our ideas for inspiration,” Marjorie said, returning to the theme of sharing. 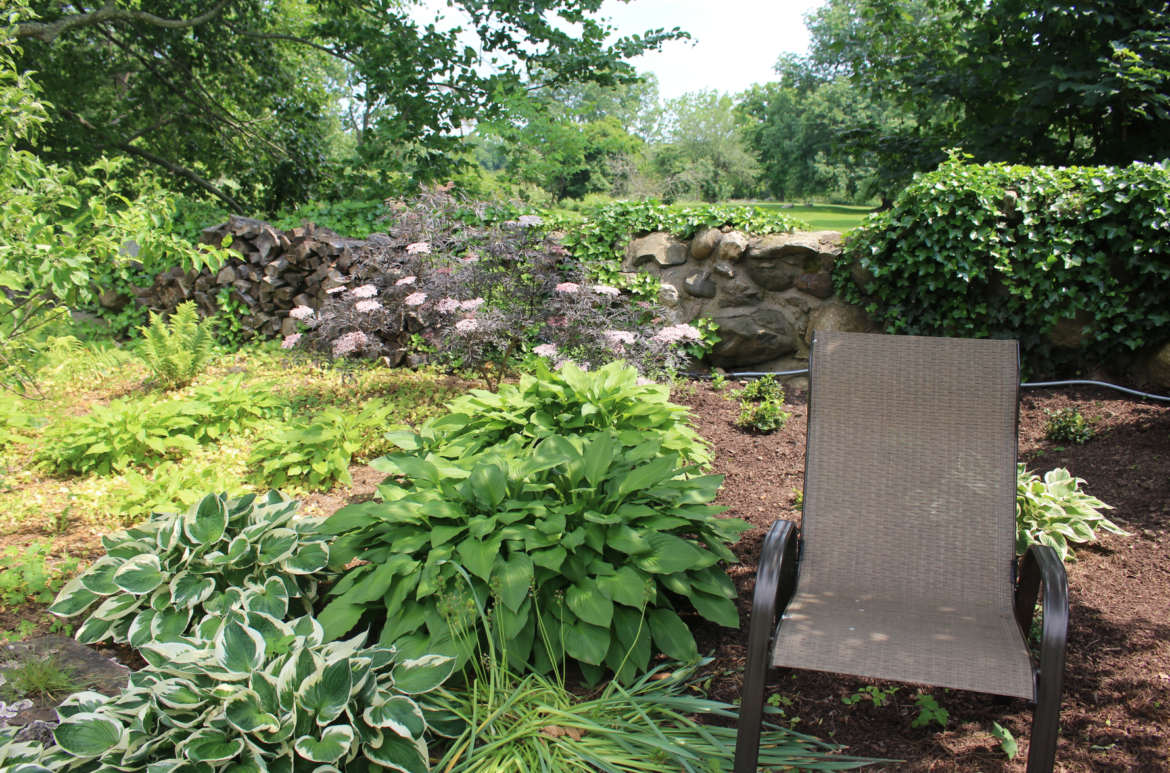 For years, the retired school teacher said she delighted in being able to give gifts of saplings to colleagues and friends. She even donated 150 saplings to her church’s tag sale.

The saplings, she said, are volunteers that dot the circumference of  mature trees on her property. She digs them up, puts them in pots and nurtures them until they are ready for new homes.

“We share almost every plant that comes up,” Marjorie said. 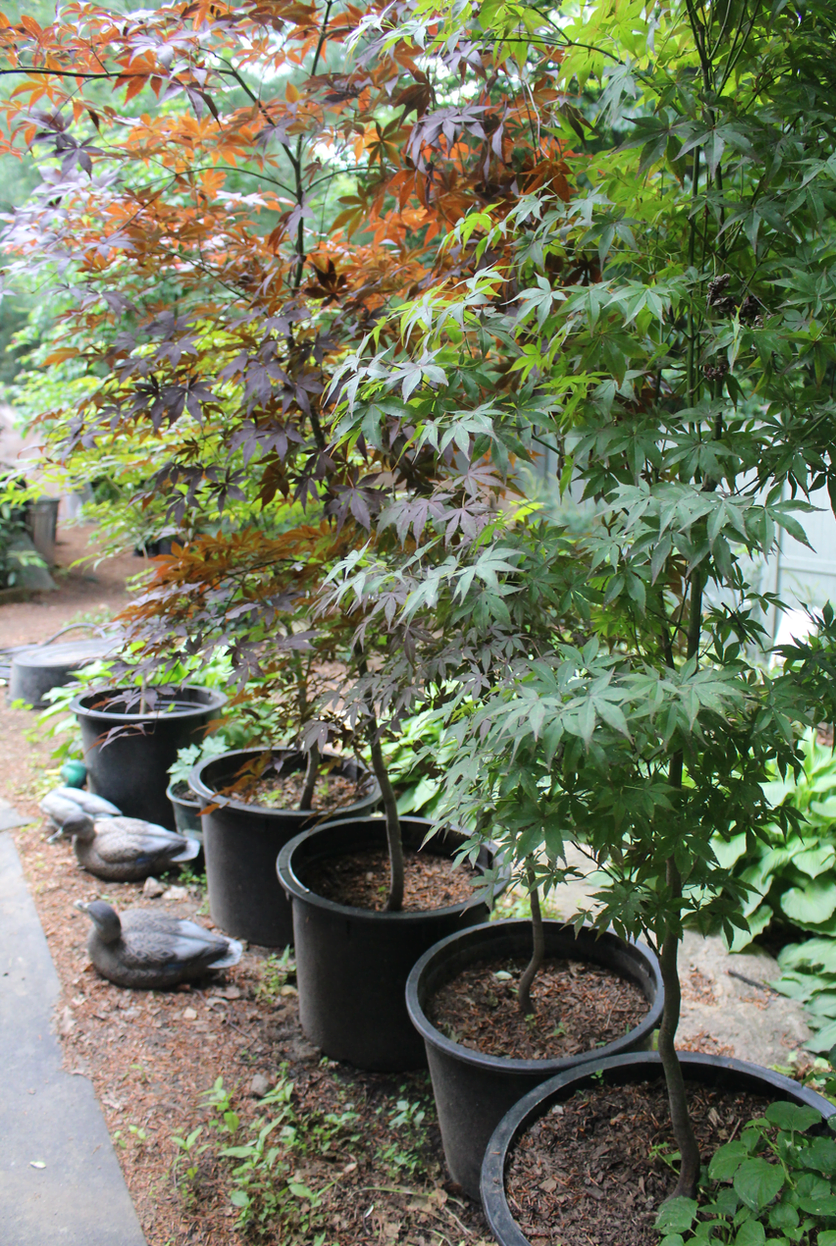 Along the meandering garden path, the Smiths erected an accessible gazebo that affords more sweeping views. 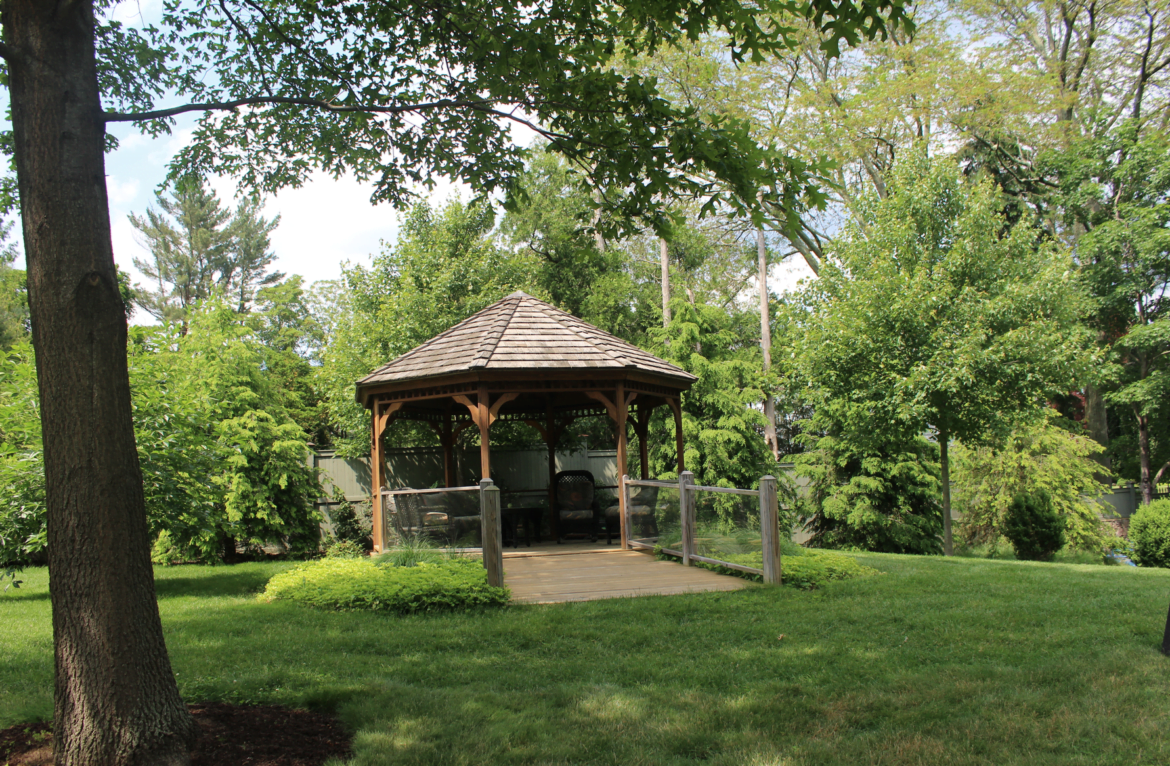 This week, the Smiths are installing an accessible vegetable garden in the lower corner of their property. The beds, which like the rest of the gardens, are accessible by wheelchair or walker. 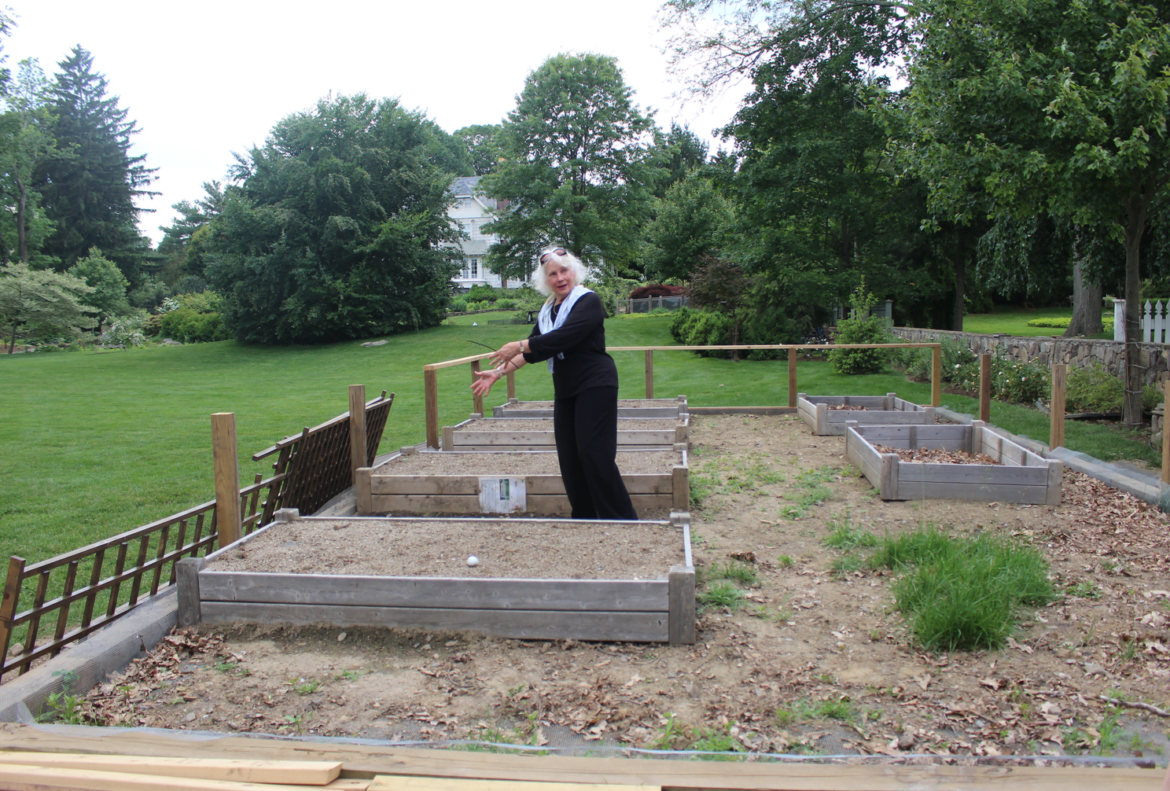 Along the meandering garden path, the Smiths erected accessible vegetable garden beds in the lower corner of their property. June 11, 2017 Photo: Leslie Yager