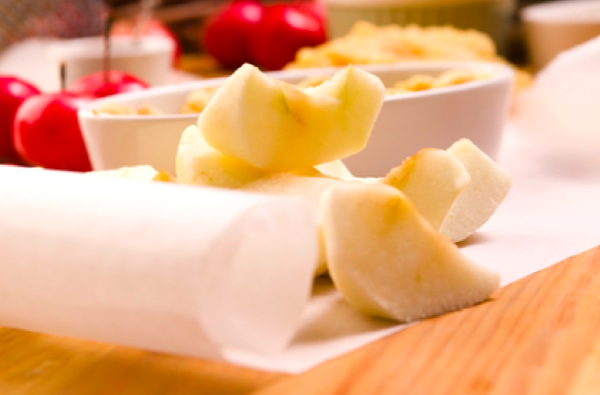 Pilgrims ate baked goods with almost every meal and apple pie was a favorite. The pilgrims brought many of their favorite fruits with them to North America. Colonists brought young apple trees from England and planted apple orchards. Pilgrim women used the apples to make apple pie, which quickly became a favorite dessert. Pilgrims even ate apple pie for breakfast.

In a medium-size bowl, Sift together 2 cups flour and kosher salt. Add canola oil and cold water to measuring cup, but don’t stir. Add liquids to flour and stir with fork just until mixture forms a ball.  Divide dough into 2 pieces. One should be slightly larger than the other.

Between two large pieces of wax paper or parchment paper roll larger dough into about a 12 inch circle. Peel off paper and fit dough, into greased 9 inch pie pan. Reuse wax paper to roll out smaller dough for top crust. Peel off and set aside for a moment. Add filing to pie shell and distribute evenly. Apply top crust and press dough edges together to seal. Crimp or flute edges. Made a few slits or decorate cuts in top crust in order for steam to escape. Cover edges of crust with either a pie crust shield or aluminum foil to prevent burning.

Place pie on baking sheet and place in oven. Bake for 50 Minutes until filling bubbles. Remember that each oven heats differently so make sure to check at 40 minutes.  Remove from oven and cool on wire rack. Cool completely. Store pie at room temperature, covered with clean dishtowel for up to 2 days. Crust will become soggy if pie is refrigerated or tightly covered. Serve plain or with vanilla ice cream.