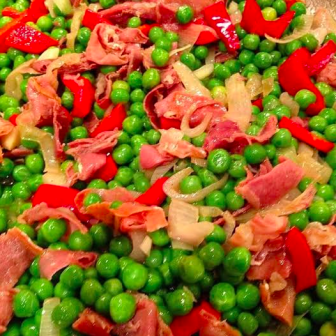 By Victoria Hart Glavin of Tiny New York Kitchen
Spring is about bright and vibrant colors and flavors. This dish is as pretty as it is tasty. Peas are considered by most people to be a vegetable, but because they grow in a pod, botanically they are a fruit.

In a large-size skillet, combine olive oil, garlic and shallots. Cook on a medium heat for 4 minutes. Add prosciutto and cook for another 4 minutes.  Add peas, bell pepper and chicken broth. Cook for 10 minutes. Season with kosher salt and freshly ground pepper to taste. Remove from heat and transfer to serving bowl. Serve hot or set aside to serve later at room temperature. Serve 4 to 6 as a side dish.