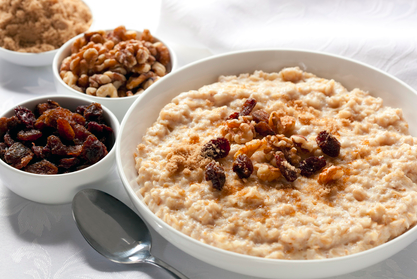 The best oatmeal that I’ve ever had was the first time I stayed in the Lake District. It was the beginning of fall and there was a bit of a chill in the mornings. The woman who ran the small Inn was a very nice Northern England type who would get up very early every morning to get this oatmeal started. I can still taste it years later. Steel-cut oats are the secret ingredient for this unbelievable oatmeal. ”

Bring water to a boil in small saucepan.

Combine cream and maple syrup in small pitcher and set aside to come to room temperature.

Gently stir oats into boiling water and return to boil. Reduce heat and simmer, stirring occasionally, for 30 minutes or until water is absorbed and oats are tender.

While oats are cooking, put raisins in small bowl, cover with warm water, and set aside to plump for 15 minutes. Remove raisins from water and pat dry. Toss with brown sugar until nicely coated. When oatmeal is ready, stir in cinnamon and half of maple cream. Ladle oatmeal into individual bowls.

Top each with small handful of raisins and walnuts. Serve with remaining maple cream.