The Greenwich High school Performing Arts Center welcomed parents, alumni, and members of the community to the final Chorus concert of the year. The theme was the “Pops Concert.” Caroline Silver is a member of concert choir. “In the concert every group features a Beatles song,” she said.

Many other popular pieces included songs by Freddie Mercury, Leonard Cohen, and more.

The choral department not only provides students a place to enrich their musical abilities, but a welcoming community.

“My sister is in concert choir,” said Avrey Carifa, an older sister of a choral student. “It has helped her keep ties with middle school friends and make new one at the same time.”

During the concert, all seniors wore red boutonnieres and united for a final song. Before the performance, Mr. Taylor gave a heartwarming speech to the group and his hopes for their future. 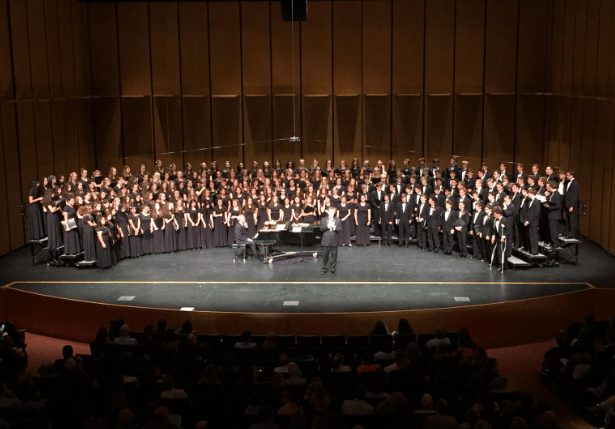 All the choirs combine to sing pieces from Beauty and the Beast. Photo: Julia Moch

Something to Believe In – Alan Menken & Jack Feldman, arr. Huff

A Beatles Medley: ( I Want to Hold Your Hand, Yesterday, She Loves You)  – John Lennon & Paul McCartney, arr. Shaw

Something is Holding Me Here – Kathleen Quarfordt & Patrick Taylor

At the end of the performances, the chorus received a standing ovation to show appreciation for their hard work and wonderful performance.

Andrew Tienken was part of the audience at the concert.”The high school choir is such an incredibly strong section of the Greenwich High School music department. Their music is tasteful & well-developed, and as a result they put our school’s new auditorium to great use,” said Drew.

Preview of Be Our Guest- Beauty and the Beast from the concert:

For more music by the GHS choirs, there are CD disks available for purchase through Patrick Taylor.