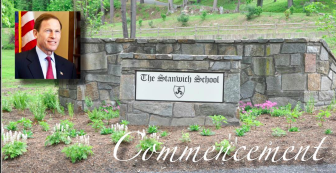 The Stanwich School is pleased to announce that United States Senator Richard Blumenthal — a former Stanwich School parent — has accepted the school’s invitation to serve as keynote speaker at Stanwich’s first commencement ceremony on May 29, 2014.

“I’m excited and proud to attend this joyous and significant graduation — launching these very special young people on the next phase of their educational journey,” said Senator Blumenthal.

Sworn into office in January of 2011, Richard Blumenthal is serving his first term as a United States Senator from the State of Connecticut.  Sen. Blumenthal served an unprecedented five terms as Connecticut’s Attorney General. A key player in the national fight against Big Tobacco, he helped bring an end to marketing aimed at children. He also helped lead a coalition of all 50 states that culminated in historic agreements with social networking sites to better protect children from Internet predators. Blumenthal graduated from Harvard College, and Yale Law School. From 1970 to 1976 he served in the US Marine Corps Reserves, and was honorably discharged with the rank of Sergeant.

“In this historic inaugural year, with founder Pat Young’s vision to have a Pre-K through Grade 12 coeducational independent school in Greenwich now realized, I find it most suitable to have the Senator addressing our charges as they matriculate. I am confident that his message to our emerging moral leaders will inspire them to heed the clarion call to make God’s world a better place,” said Paul Geise, Head of School in a release.

“I also want to report that each of our 16 seniors have been accepted to attend four-year colleges this fall. While a number of our young scholars are still finalizing their plans, it is extremely impressive to note that over 40 schools offered our students merit-based scholarships totaling more than $500,000,” Mr. Geise added.

The Stanwich School class of 2014 includes 16 young men and women who will be the first seniors to receive diplomas from the school. In its 16 year history, this is The Stanwich School’s inaugural graduation ceremony, and will take place on the school’s Stanwich Road campus at 4:00pm on Thursday, May 29, 2014.