Gordon Jones, faculty advisor for the GHS math team, introduced his wining team at Thursday’s Board of Educaiton meeting. For the 6th consecutive year, the team are Connecticut State Math Champions.

“Fairfield County is the toughest match in the state. It’s a 6 match season over 5 months and this year GHS won the title by 115 points,” Mr. Jones said. “That might not sound like much to you, but after 8 years involved with the math team, the highest we won by was 20.”

Mr. Jones described the current team as possibly the strongest Greenwich High School has ever had. Describing the team as student-directed, he said he tries to stay out of the way as much as possible.

“I have three very capable captains who kept the level of enthusiasm up,” he said. The season is very long, with practices starting in mid-September, and New England Regionals scheduled for late April in Canton, Massachusetts. 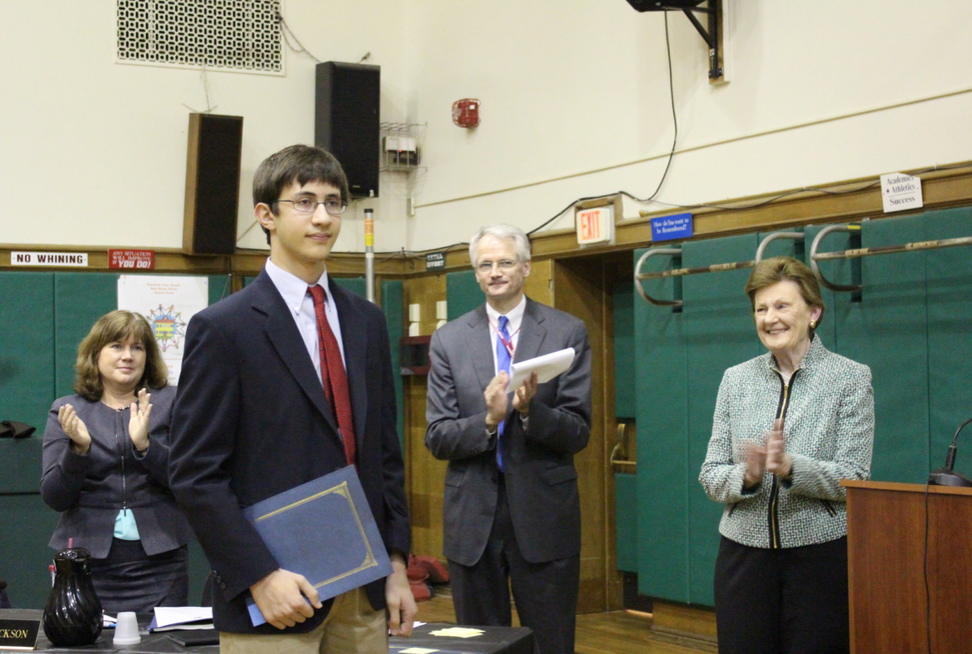 Michael Kural, a GHS junior, was honored by the Board of Ed in March after winning one of 10 Gold Medals in the 2015 Romanian Master of Mathematics competition. Credit: Leslie Yager

“There is a CT All-State team,” Mr. Jones said, adding that four of the eight GHS  students made that team and will travel to Penn State in June to represent Connecticut.

Mr. Jones introduced the team, including captain, Julia Wang who is off to Columbia in the Fall, and Andrew Ma who is off to Princeton in the fall. The third captain is Michael Kuralt, one of six students selected to represent the US in an international math competition in Bucharest Romania, where he won a gold medal.

This dominant team has three members who are freshmen, which Mr. Jones said strikes fear in the hearts of competitor teams.