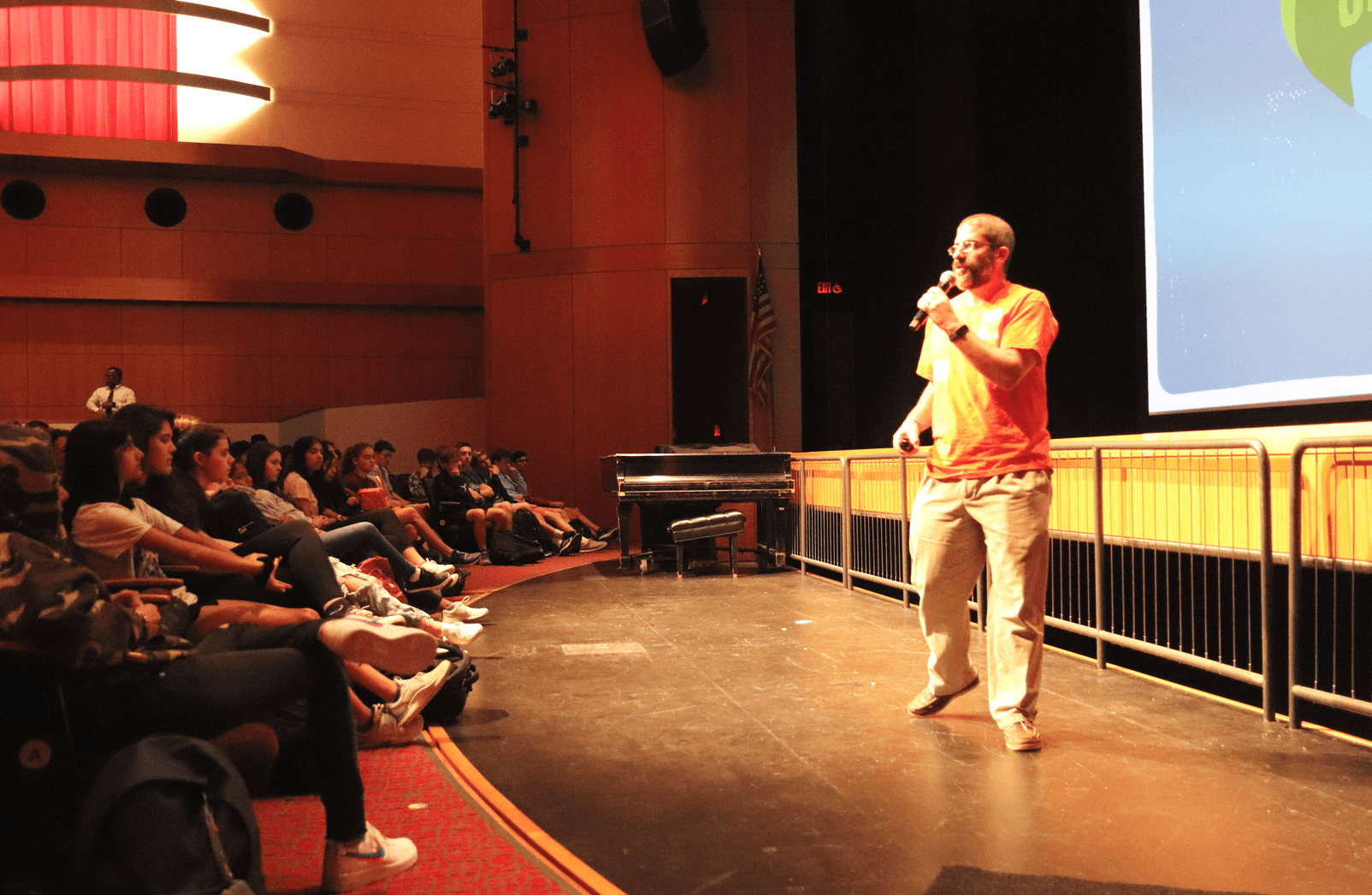 On Tuesday the 700+ members of the Greenwich High School class of 2023 participated in an assembly called “Say Something.”

Jared Cavagnuolo, who previously was a school teacher for 15 years, and now travels to schools for Sandy Hook Promise, talked about preventing gun violence and suicide, as well as spotting people in pain and having the courage to connect them to help.

“As a member of a group often victimized when the subject of violence comes up, I have depression and anxiety,” he said. “I didn’t know that I had these conditions until I was formally diagnosed in adulthood. I went through my middle school and high school years with untreated depression and didn’t know why. I thought there must be something wrong with me.”

“If you are one of the 1 in 5 dealing with any type of mental health condition, you’re not alone. And there’s nothing wrong with you,” he said.

Sandy Hook Promise operates on the premise that every act of violence is preventable. The presentation focused on how teens are the eyes and ears of a school and the important of being alert to threats and warning signs.

In 4 out of 5 school shootings, at least one other person had knowledge of the attacker’s plan but failed to report it.

Nearly all mass attackers in 2018 made threatening or concerning communications and more than 75% elicited concern from others prior to carrying out their attacks.

In almost every documented case of active shooters, warning signs were given off.

70% of people who die by suicide tell someone their plans or give some other type of warning signs.

Mr. Cavagnuolo broached the “Say Something” theme by saying that people deal with with pain in both healthy and unhealthy ways, and often times they are expressed in posts on social media and texts.

He said withdrawal from others is a red flag, as are ongoing acts of bullying or having role models who commit acts of violence.

Other warning signs are excessive anger, extreme mood changes, big personality changes, excessive feelings of rejection or anger, holding grudges, blaming others for failure, and fear of riding the bus or going to school.

They may even try to recruit a friend to join in an attack. The person may warn certain classmates to stay away from school or an event or brag about an upcoming attack.

“Whatever threat they make, they want to be helped. They may not understand that they need it, or don’t know how to get it. I was one of those people.” – Jared Cavagnuolo

Cavagnuolo said he didn’t want to convey a sense of gloom, but rather one of hope.

“We can intervene and have the power to stop these things before they turn into a statistic or a violent act,” he said.

He said that while social media is the main source of threats, they might be conveyed face-to-face, on the bus, in the cafeteria, in school hallways, sporting events or parties.

A threat could even come in the form of graffiti or artwork.

And while young people deal with a barrage of images and messages in social media, it is important to take a threat seriously and say something immediately.

Cavagnuolo said there is a difference between being a snitch or a tattle-tale and being an “upstander” and getting a person the help they need.

“Saying something means getting someone help for their own safety and well being, and to protect yourself and others from harm. It’s when you want to help someone.” 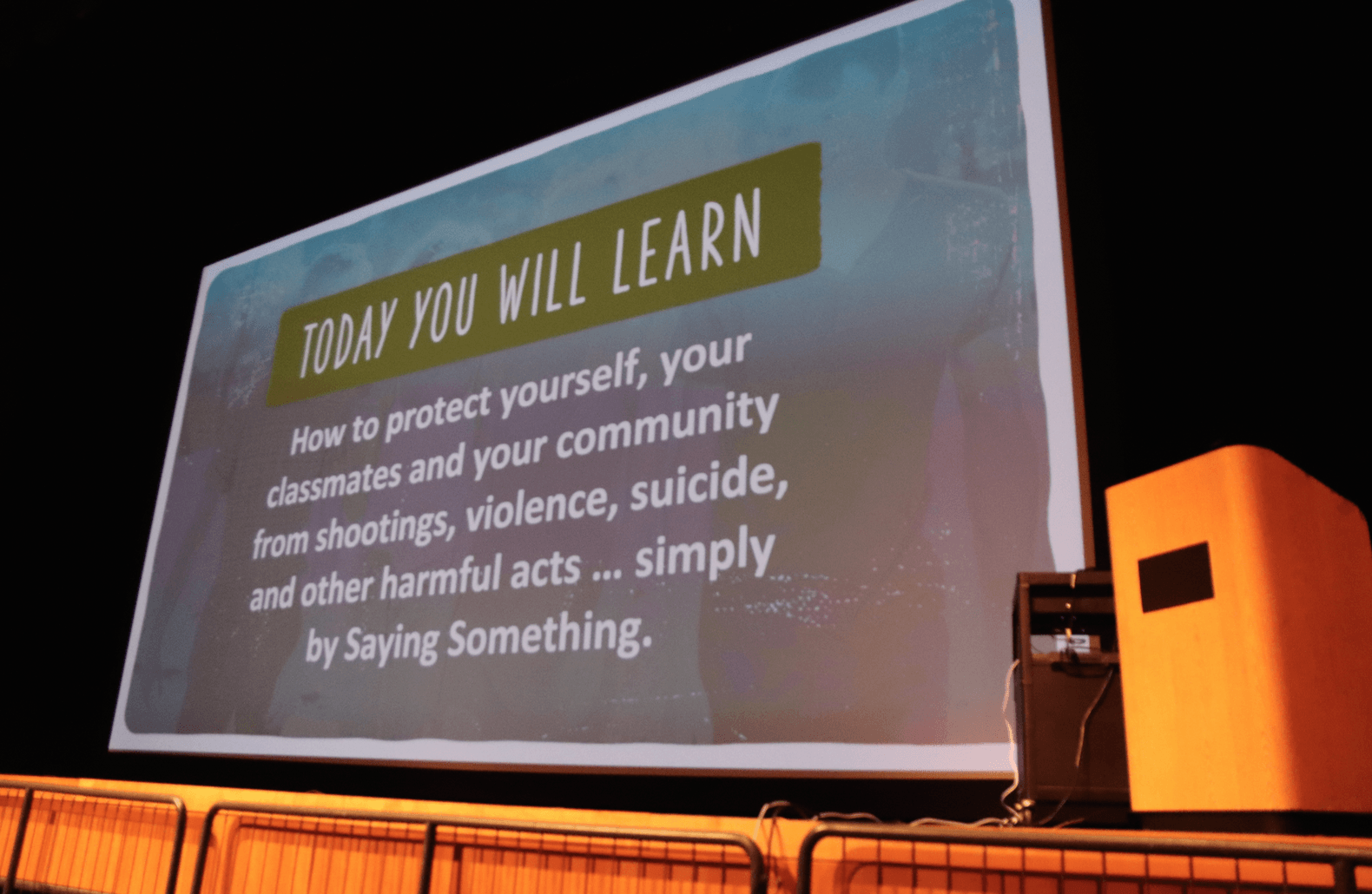 Cavagnuolo said saying something takes courage, but it is important to talk to a trusted adult – perhaps a coach, friend’s parent, teacher, family member, religious leader, or school counselor.

“They have the experience to know what to do. That trusted adult might not know what to do, but they know who to go to…..And bring any texts, photos, videos or other communication you have. Be direct, write down what the person said, and tell the adult, ‘I must talk to you about (name of individual).’ Make it clear.”

At the end of the presentation, the entire 9th grade recited the “Say Something” pledge, promising not to keep quiet if they see or hear about something dangerous.

An offshoot of Sandy Hook Promise are SAVE Clubs.  SAVE stands for Students Against Violence Everywhere. The clubs are are a place for young people across the country to show their leadership, creativity and passion.

At Greenwich High School the Roots & Shoots Club is affiliated with the SAVE Promise Club.