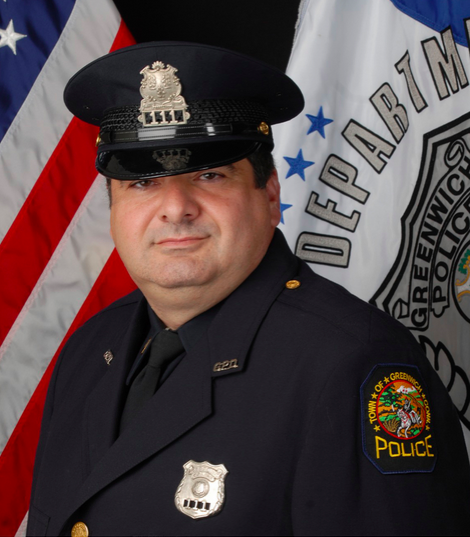 Chief of Police, James Heavey, announced the retirement of Police Officer Joseph Ferraro Jr. effective March 1, 2015. Officer Ferraro completed 23 years of service with the Greenwich Police Department. Officer Ferraro was raised in Norwalk, where he attended Central Catholic High School. He graduated from Sacred Heart University in 1986 with a BS in Accounting and then went to work for the Internal Revenue Service until he was sworn in as a Greenwich Police Officer on October 26, 1992.

Historically the first organized law enforcement institutions in America were Night Watchmen. They were charged to maintain order and to “keep the Watch all night from sun setting unto sun rising. And if any stranger do pass by them he shall be arrested until morning.”

Officer Ferraro would embody this historical police figure and work steady Midnights for his entire career assigned to the Uniformed Patrol Division.

Officer Ferraro’s file contains Department commendations for excellent police work and actions exemplifying the best tradition of police service. Of particular note are the letters of gratitude from the citizens of Greenwich.

“Officer Ferraro lived up to the Department’s vision to improve the quality of life within Greenwich, while at the same time maintaining respect for individual rights and human dignity. I wish him the best in his next stage of his life at the Department of Motor Vehicles,” said Chief James Heavey in a statement.

In retirement Officer Ferraro will continue to serve the Town of Greenwich as a volunteer Special Police Officer.