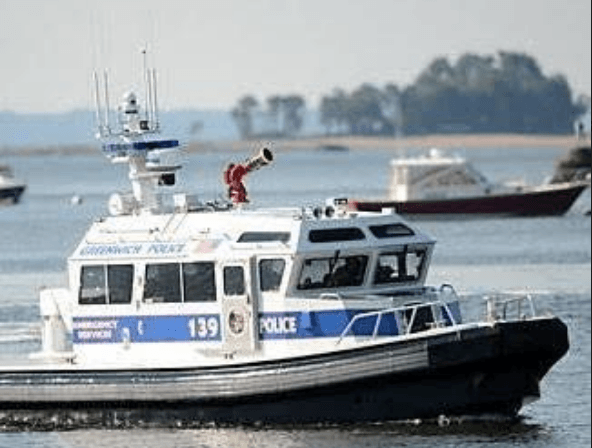 Police assigned to the Marine Section assisted in the rescue of distraught man in Long Island Sound off of Marmoneck, NY over the weekend.

According to a statement from Greenwich Police, on Saturday, Officers Frank DiPietro and Joseph Turscanyi of the Greenwich Police Departments Marine Section received a Mayday call requesting assistance for a vessel in distress and a man overboard in the area of navigation buoy 40.

Upon arrival at the scene officers observed that rescuers from local municipalities, the US Coast Guard, and good Samaritans were all attempting to remove a subject from the water who was actively resisting efforts.

According to the statement, Officers DiPietro and Turscanyi were able to maneuver Police Boat 139 so they could approach the man from behind where they would not be seen.

When they got close enough, officers were able to pull the man from the water and onto the swim platform.

Although the man continued to struggle with officers, he was secured aboard PB 139 and transported to a waiting ambulance on shore.

Greenwich Marine Officers are highly trained and experienced in water rescue. By combining top of the line equipment, excellent training, and cooperation between agencies averted a tragedy and saved this man’s life.