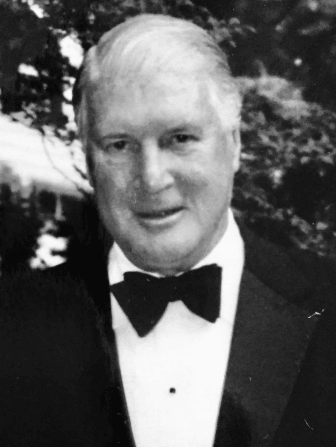 Theodore Holton Walworth Jr. died January 16 at 95 years old in Greenwich, Ct where he was born in on July 19,1924, to Theodore Sr and Janet Warford. Mr. Walworth was married to Joan Petersen in 1949 who predeceased him in 2013.

Mr. Walworth is a graduate of Greenwich High School class of 1942.

He served his country in WW II as a medic from 1943 to 1945 in the European theatre. He received a purple heart for wounds received in Belgium. Mr. Walworth considers his military service the most important single event of his life because it established discipline and specific standards of individual conduct. This dominated how he conducted himself with people through out his life. He believed character and integrity to be integral qualities that led to a full and good life.

After the war he used the GI Bill to enter Nichols College. After college he was employed by Mr. Edward Noble who had recently purchased The American Broadcasting Company. Mr.Noble made it clear he had to earn his own way from that point on. Mr. Walworth would proudly say he started in the mail room. Thus

he started his 39 year career in the Broadcast industry. He held sales and management positions in Radio and Television serving for NBC in Cleveland, Philadelphia and New York. He briefly had combined duties as VP General Manager of WNBC Radio and TV and continued at the helm of WNBC-TV in New York for ten years . He finished his career as the long standing President of The

NBC owned Television Stations and held a position on the NBC Board of Directors.

He matured with the industry and found his participation rewarding, exciting, educational, powerful and allowed him to personally mix with our great American Leaders. As Mr. Walworth said “ An example of the American dream”.

He is survived by his two children Wendy Schrijver and T.H. Walworth III and four grand children, Andrew and Kristin Schrijver and Elizabeth and Sarah Walworth

A private service will be held.