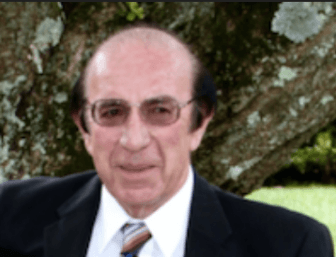 Joe and Cathy moved to Greenwich in 1974, where they raised their family. Joe was a loving husband, a dedicated father, and a proud grandfather who put family before all else.

Joe was very proud of his Sicilian-Italian heritage, and the tradition of a strong sense of dedication to family. He would always say, “I love to feed people,” and “there is always room for one more at the table.” His favorite place in the world was the family summer home in Old Saybrook, CT.

He was happiest there, entertaining family and friends. For many years, with the help of his family—especially his brother, Richard, and his son, Chris— Joe would host family reunions of over 100 people on the beach in the summers, including family who came from Italy to attend.

The menus were extensive, and the events were all-hands-on, with many family members
assisting in every aspect of the reunions. In addition, Joe was an avid boater, having owned several boats over the decades, and taught both of his sons to boat. He completed the Power Squadrons courses with his wife and both of his sons to ensure their safe operation of their boats and Jet-Skis. Mr. Minio was a very successful business man.

Among his greatest accomplishments over an expansive career in Finance and Business Acquisitions, he was the President and CEO of Publicker Industries, Inc, and played an integral role in the development of a revolutionary chemical known as Gasahol. In addition, he was the CEO of Bic in the 80’s.

Later in his career, Joe focused on acquiring failing businesses and turning them back around into profitable ones. Throughout his illness and until his final day, he owned and operated three companies: Adina, Inc., E.W. Tompkins Acquisitions, Inc., and Shoreline Holdings, Inc.

He is also survived by a brother, Richard (Claire) of Dayville, CT. He is further survived by two grandchildren: Mark J. Minio and John P. Minio of Rye. Joe was predeceased by
his wife, Cathy, and his older brother, Tony.

In lieu of flowers, Joe had requested that donations be made to the Pulmonary Fibrosis Foundation in his name: www.pulmonaryfibrosis.org.

To honor his life, family and friends will gather on Tuesday from 4:00 to 8:00pm at Coxe & Graziano Funeral Home 134 Hamilton Ave. Greenwich, CT.

A Mass of Christian Burial will be held 10am Wednesday at St. Paul’s Parish, 87 Sherwood Ave. Greenwich, CT. Entombment to follow at St. Mary’s Cemetery. For more information or to place an online condolence, www.coxeandgraziano.com