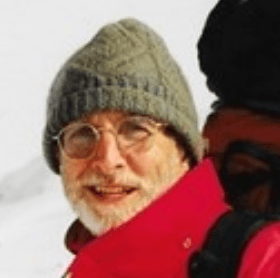 Harold Franklin Bloomer, Jr, lawyer and adventurer, died at home on September 13, 2019 after a short battle with leukemia. He was 85.

Franklin lived in Riverside his entire life except when he lived in Jeddah, Saudi Arabia and London. He retired a partner at Morgan, Lewis and Bockius.

Franklin had a long bucket list. His outdoor activities included sailing, hiking, running, canoeing and kayaking, Nordic skiing and bicycling. He traveled to all 7 continents and run 6 marathons. Franklin sailed from a young age, both racing and cruising. His adventures included sailing across the Atlantic in 1987 via Iceland, hiking most of the Appalachian Trail, cycling across the continental USA, and annually skiing hut to hut in Scandanavia. His most unique trip was paddling around Baffin Island in Klepper folding kayaks in 1974. Planning each trip gave him as much delight as the trip itself.
Franklin loved opera and choral music. He sang in London, Saudi Arabia, New York City and at home in Greenwich, Connecticut.

A longtime member of the Greenwich Choral Society, Franklin also sang with the Berkshire Choral Festival, the Amherst Early Music Festival and the New Rochelle Opera.

Franklin was elected to the Greenwich Representative Town Meeting for 14 two-year terms. He served on local and state advisory bodies focused on transportation issues, formed Greenwich Safe Cycling, and started an annual Mother’s Day bike ride 17 years ago. He designed bike routes for the East Coast Greenway in use today and helped found the Calf Island Conservancy, an organization affiliated with a national wildlife refuge off Greenwich.

Franklin realized many of his dreams but said his “greatest accomplishment is my five wonderful, accomplished daughters” who were by his side when he passed away.

A memorial service will be held at the Riverside Yacht Club on Saturday, November 9. In lieu of flowers, the family asks that donations are made to the Appalachian Trail Conservancy.