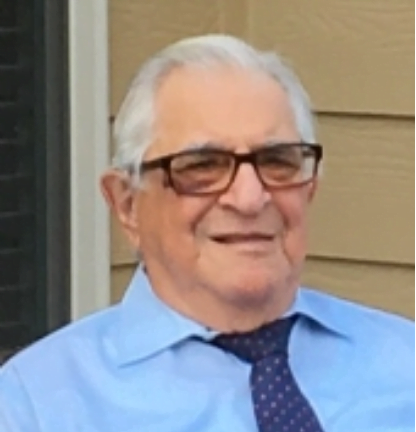 Emil Smeriglio, lifetime resident of Greenwich and a Chickahominy legend, passed away peacefully on December 17, 2016. He was 91.

Emil was born March 24, 1925 to the late Thomas and Louise (Berlingo) Smeriglio of Byram. He attended Greenwich schools and in 1943 enlisted in the US Navy where he proudly served his country during WWII as a gunners mate aboard the USS Springfield. After returning from the war, Emil met and married his beloved wife, Johanna Angotto.

Emil owned his own garbage route before becoming a large equipment operator for the Town of Greenwich transfer station. An accomplished opera singer, he sang leading roles in many Gilbert and Sullivan operettas and performed off Broadway with the West Chester Opera Company.

Emil’s booming baritone voice was also heard at many local events, church choirs, weddings, and as a singing waiter at Manero’s Steak House.

Emil was deeply involved in the local Greenwich community. He was Commander and Chief of the VFW Post 29, a justice of the peace, a member of the RTC, and a Redman. He was a past PTA president of Hamilton Avenue School where he was the driving force behind the traffic safety lights and signs at the intersection of St. Roch’s Place. He and his wife were the founding members of Harvest Time Church. His greatest passions were his family, his faith, his country, his community and Italian food. He enjoyed reading, hunting, square dancing, gardening and fishing. During the holidays could be found around town as a professional Santa Claus. Emil is predeceased by his beloved wife of 63 years, Johanna; his brother, Louis Smeriglio; his sister, Carmella Smeriglio Vincoli; and his son-in-law, Anthony Santana.

He is survived by two brothers: Thomas (Marge) Smeriglio of Cos Cob and Leo (Janet) Smeriglio of NH. He leaves behind his four devoted children and their spouses: Louise and Michael Cogan, Charlene and Doyle Passmore, Roxanne and Marc Kuppersmith, and Thomas and Susan Smeriglio.

He was the proud grandfather of eight adoring grandchildren and eight great grandchildren who love their “Poppie Emil.” He also leaves behind cousins, nephews and nieces.

A funeral service will be held on Friday, January 6th at 10:00 am at Harvest Time Church, 1388 King Street, Greenwich, followed by internment at St. Mary’s Cemetery in Greenwich.

In lieu of flowers, the family asks that donations be made to the Greenwich Boys and Girls Club. For more information or to place an online condolence please visit www.coxeandgraziano.com.