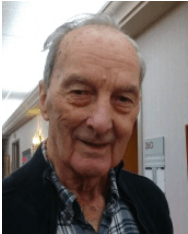 Donald Macintyre passed away peacefully the morning of Thursday, February 28 at 2:00am.

“Don” as he was known by family and friends, was born August 25, 1932 in Port Chester, N.Y and grew up in both Port Chester and Greenwich. He was a 20-year Veteran of the Military Police Division of the New York Air National Guards’ 105th Tactical Air Support Group at White Plains/Westchester County Airport, before the Units’ move to Stewart Air Base in Newburgh, N.Y. when it was transitioned into the 105th Airlift Wing.

In his professional career, Don worked in the construction industry as Licensed Electrician for a period of 38 years before retiring in 1992, and was a loyal and devoted International Brotherhood of Electrical Workers (I.B.E.W.) member of Local #3, previously known as Local #501.

During his retirement years, he loved to be outdoors and could always be found outside tending to the yard, polishing his car, or simply enjoying the company of his family, or listening to his recordings of the likes of Benny Goodman, Tommy Dorsey, and Glen Miller, and on occasion was known pump up the volume to the shrill of the Bagpipes, a nod the his Scottish Heritage.

He is pre-deceased by his parents Eleanor Pelham (Leibrock), and James Macintyre, and a grandson, Matthew James Macintyre. He is survived by his loving wife of 64 years, Dorothy (Maffucci), a half-brother James Macintyre, Jr. of North Carolina, a son, Robert and his wife Marie, and a Grandson, Steven.