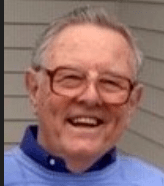 Chet, as he was known, was raised in Port Chester and graduated from Port Chester High School in 1949, where he was a star catcher for the baseball team and also, a quarterback on the football team.

In 1966, he and his beloved wife, Sallyann, relocated to Greenwich.

The couple was married at Our Lady of Mercy in Port Chester on November 27, 1954. They were looking forward to their 65th anniversary next month. Chet was a proud veteran of the United States Army, having served in the Korean Conflict. He went on to work in the printing industry. He semi-retired and went on to work for the Town of Greenwich TAG as a driver and as a ranger for the Griff Golf Course.

He was also a member of the Griff Men’s Golf Club, as well as the Knights of Columbus.

Chet was dearly loved by his family and friends. They will all miss his singing of “San Francisco”.

Those at Greenwich Woods who knew him as “Chester from Port Chester”, will miss him as well. In addition to his wife, Chet is the beloved father of Chester Forman Jr (wife Beverly) and the late Michael Forman. He is the devoted grandfather of Christopher (Sara) of Fairfield, Stephen (Candace) of Stamford and Matthew of Portland,
Oregon, and great grandfather of Carter, Charlotte, Hope and Cash.

Chet is the dear brother of, Cecilia Forman Tortora and her husband, Michael as well as the late, John Forman, Josephine Forman and Mary Forman Jarombek.

Family and friends will gather for a Mass of Christian Burial 10:00am Wednesday at St. Paul’s RC Church in Greenwich followed by interment at Putnam Cemetery.

In lieu of flowers, please make a contribution in Chet’s name to your favorite charity. For more information or to place an online condolence, www.coxeandgraziano.com