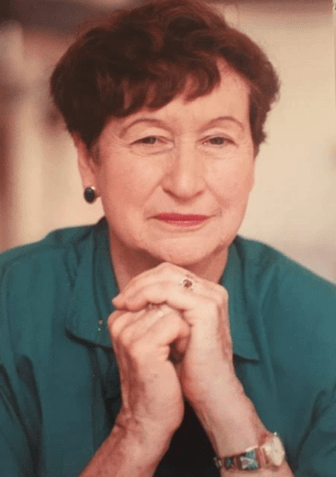 Billie Alban, February 7, 2020, age 94. Alban was a leader in the field of Organizational Development, the systematic effort to improve organizational effectiveness. She was a lifelong advocate for inclusion and the positive outcomes it brings forth. A biographer wrote “her profound contribution…is making it a moral imperative to give voice to the voiceless.” Creating the Future Together was both one of her book titles and her lifelong guiding principle.

Alban was born Renice Telfair Wetter December 22, 1925, in her parents’ home on Washington Square Park in Greenwich Village. Her mother was the 20th century artist Gladys Mock; her father, engineer Pierce Trowbridge Wetter, imprisoned at Leavenworth for his conscientious objection to World War I, was later pardoned by FDR. Pierce Wetter also fought to save Washington Square from demolition by New York City Parks Commissioner, Robert Moses, and was a supporter of workers’ unions. Billie was deeply proud of a civic activism lineage dating to the American Revolution.

Alban attended Goddard College and studied graduate drama at Yale University. She married fellow Yale student, Guillermo Alban, and moved to Ecuador. There, she partnered in her husband’s petroleum shipping business. She also taught drama, helped found the local Episcopal Church and worked to improve education and food security for women and children. Alban returned to the United States in 1965 and began her organization development career with the National Training Laboratory (NTL).

Alban became a foremost practitioner of Organizational Development. She pioneered inclusive methods, commonplace today but novel at the time. With a gift for innovation and a knack for assessing people and institutions, Alban helped communities and businesses adapt and improve. Her books advocate transformation through large-scale interventions. Her mantra was to include all stakeholders. Alban’s clients included top Fortune 500 companies, yet she retained her community roots through ongoing pro bono work. Alban also published extensively and taught programs at Columbia University, Pepperdine, NTL and elsewhere.

Late in life, Alban lost her eyesight. She then vigorously dedicated herself to raising awareness and championing handicap accessibility.

Billie’s was cherished as a wonderful mother and adored grandmother. She is remembered for magical bedtime stories and reading the Narnia series aloud. She loved music, sang joyfully and recited classical poetry from memory. To all who knew her, she was a charismatic source of strength, humor and optimism.

A memorial service is planned for April.