In last week’s municipal elections, Democrats won races for mayor or first selectman in 14 of Connecticut’s suburbs, including, Weston, Bristol, Guilford and Pomfret.

In Greenwich, Democratic candidate for first selectman Sandy Litvack came close to depriving Peter Tesei of a 6th term, earning 47% of the vote.

Election night was a good one for Democrats across the country and in Greenwich, a signal perhaps of disapproval of the Trump agenda.

At the Greenwich Senior Center on election eve, Democratic BET candidate David Weisbrod shouted to the crowd, ‘Turn the town blue,’ as tentative returns indicated Howard Richman would likely snag the Tax Collector position, and that Democrats seemed poised, for first time in decades, to chair the Board of Estimate and Taxation (BET).

As it turned out, the Democrats did win control of the BET, but uncertainty lingered over the BET outcome for two days following an error in tabulation.

The  ‘unofficial’ results sent out by the Office of the Registrars of Voters on Tuesday night did not include the District 1 in their calculation of the totals,” said Jill Oberlander, a Democrat incumbent who was the overall highest vote getter, with 6,916 votes. ” As a result, she said, “It looked like the Republicans had the majority on the BET.  These results did not match the numbers brought back to the parties by poll watchers.”

Oberlander said the error was pointed out to both the Republican and Democratic Registrars of Voters early on Wednesday morning.

“We did not receive the certified results until mid-day Thursday,” she said. “Despite repeated inquiries from members of the caucus, we did not receive official acknowledgement of the error during the period between Tuesday night and Thursday’s certification results.”

An editorial in the Hartford Courant on Nov 9 said that by noon on Wednesday, Nov 8, 145 of 160 Connecticut towns had reported results electronically to the secretary of the state.

Greenwich was one of the exceptions.

The editorial characterized Greenwich as reluctant to embrace new, optional technology. (The electronic reporting to the secretary of state will become mandatory for the next election.)

The new, real-time reporting technology is designed to allow towns to report their election results electronically right after polls close, and replace the pencil and paper method.

The editorial relegated Greenwich to the “election results hall of shame.”

The Courant faulted Greenwich for offering to share election results by email, but asking for subscribers’ names. (There is a prompt for first and last name, but the only required field is the email address). 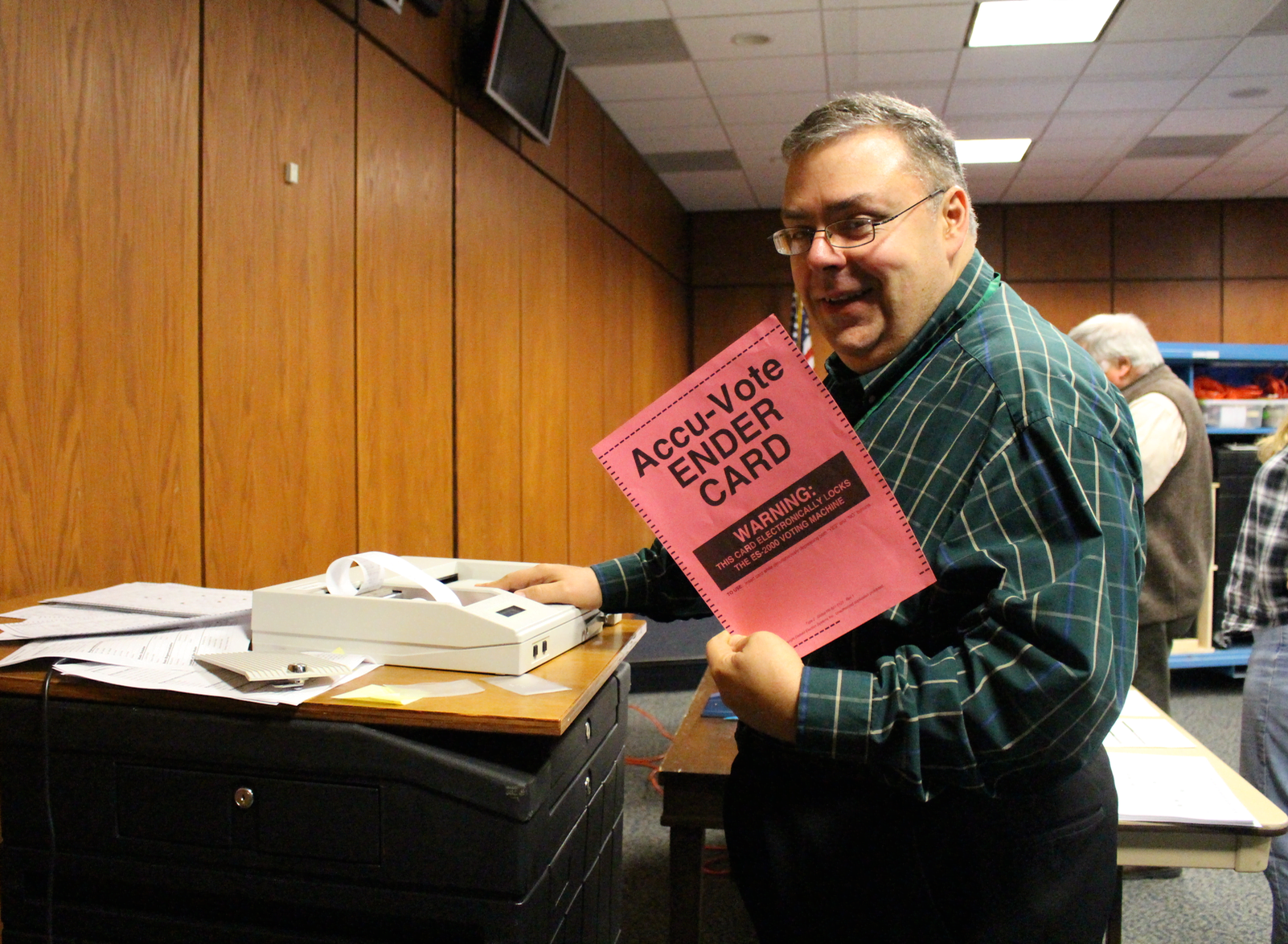 In response to the editorial, Greenwich’s Republican Registrar Fred DeCaro III, issued a letter to editors saying, “At first, I read with amusement your editorial with regards to the publication of election results. Given the distance between Hartford and Greenwich, and knowing how few people actually read the Courant in south-western Connecticut, I momentarily considered dismissing the matter.”

“To paraphrase both Edmund Burke and Donald Trump, however: ‘All that is necessary for the triumph of fake news is for good men to do nothing,'” DeCaro continued.

DeCaro said Greenwich raised its dissatisfaction with the Election Night Reporting system for municipal elections as long ago as August 2012, and expressed repeated concerns ever since.

He said that during a meeting with Deputy Secretary of State Scott Bates in April, his office demonstrated that it takes more than 60 pages to print out a detailed report from the state system, which otherwise fits on a 3-4 page spreadsheet.

DeCaro said Democratic Registrar, Mike Aurelia spoke with a member of the Secretary of State’s staff, who told him the electronic system could not handle a race with more than 30 candidates.

“Despite all its flaws (and there are many, ask any Registrar with multiple districts or lots of absentee ballots), we use the system for state elections, which just have a handful of candidates,” DeCaro wrote. “In the case of a municipal election, with the largest and most complex ballot in the state (18 inches long, double-sided), the largest RTM (292 candidates this year for 230 seats), and 2,172 individual data points to be checked, there is absolutely no way to effectively use the current Election Night Reporting system.”

DeCaro challenged the Hartford Courant to dispatch their speediest typist to Greenwich. “I guarantee that in the time it takes them to input the data into the state-provided system, I can complete our data entry, send it out to all interested parties, have a three-course meal, and get my oil changed.”

DeCaro’s department has been awarded the Democracy Cup, with the highest voter turnout of any large town or city in the state award.

“We know a little bit about elections in Greenwich,” he said, adding, “We understand what it takes to keep voters happy.”