At Thursday’s Board of Selectmen meeting, Peter Tesei worked his way through a list of topics during his First Selectman’s report. “And last but not least,” he said. “One of my favorite topics.”

“You got talent as they say,” Tesei joked back. “One of the things that residents often call in about are trees, sidewalks and utility poles.”

Mr. Tesei said he receives complaints about what is referred to as ‘double-wood’ in Greenwich, which he said describes two utility poles situated side-by-side, typically with one cut down to something of a stump after CL&P shifts their lines from an old pole to a new one. 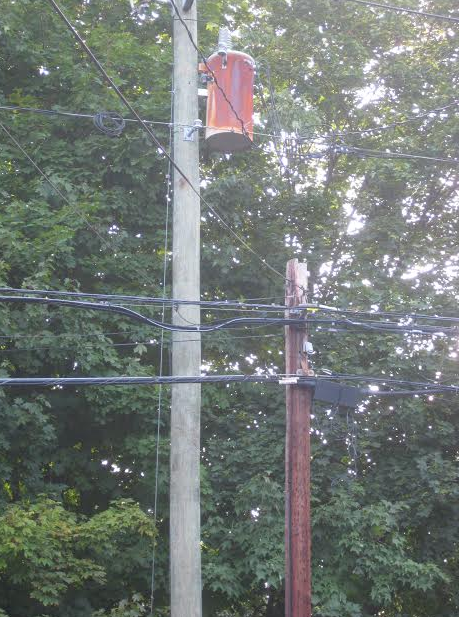 Double-wood in Cos Cob near Central Middle School. Contributed photo

The First Selectman said that when the scenario arises in Greenwich it is something of a tug-of-war between CL&P and Verizon over who has responsibility for removing the half-pole, or stump.

Mr. Tesei said he had been informed that there are approximately 130 of double-wood situations in the North Street area, where, he said CL&P shifted all the electrical equipment from the old poles to the new poles at their own expense.

“For the next six weeks you’re going to see removal of these poles along the thoroughfare, and disposing of them at their own expense,” Tesei said, referring to CL&P.

“They had escalated this issue up to up to PURA, the Public Utility Regulating Authority, because clearly they wanted mediation and sought reimbursement for their expenses,” Tesei said of CL&P who had hoped Verizon would do remove the obsolete poles.