The following document was submitted from CCofGwch.org to the Greenwich Town Clerk on Friday for inclusion in the RTM packet for the June 8 full RTM and June 1 Land Use.

Eight neighbors of Armstrong Court have exercised their rights under the Town Charter to refer the proposed makeover of Armstrong Court to the full RTM on June 8. This right uses the RTM to be the taxpayer’s final source of protection against ill-conceived projects. This action is not an appeal of MI approvals by the Selectmen and other Town Agencies. This is an entirely new and original question before the RTM of issues facing the Town that will result from the concentration of 84 new bedroom at this site.

The MI is a “de novo” action, with full and independent responsibility and authority of the RTM to approve or deny the proposal as a municipal improvement and intensification of use of the site. The RTM will have only this one opportunity to approve impacts the Town for many decades going forward.

There are substantial reasons why the RTM should reject the present proposal and go back to the drawing board for a better answer to pressing problems. Zoning actions on an open space plan and a residential overlay of developer bonuses to the business and commercial zones have already been delayed until at least September. Questions of racial balance between the elementary schools is under close scrutiny by the Board of Ed. Test score differences between the Middle Schools must be addressed as well. Consider these points which suggest a better plan is needed:

1. The Housing Authority told the Town Boards that there were no environmental hazards requiring remediation. But their own professional assessment reports revealed later that the opposite was true. Now they have been caught in this mis-representation of findings by their own consultants, and must answer to the State and Federal laws, at great expense. In his letter in Greenwich Time on April 28th protesting this, the Executive Director of the Housing Authority said it is the tax payers who will have to pay up now. Is it the Town or the Housing Authority that must fix its own cover ups of violations and contamination on its many properties?

2. Who will sleep in these 84 new bedrooms? Many additional children, with long-term impacts to economic and racial imbalance at Hamilton Ave School. The School Board needs to meet State codes for racial and economic balance. Is this the right way to start, making the problem 84 bedrooms worse? Has the Town planning process looked at alternatives to low-cost or affordable housing. Will federal law open these units to out-of-town poor? 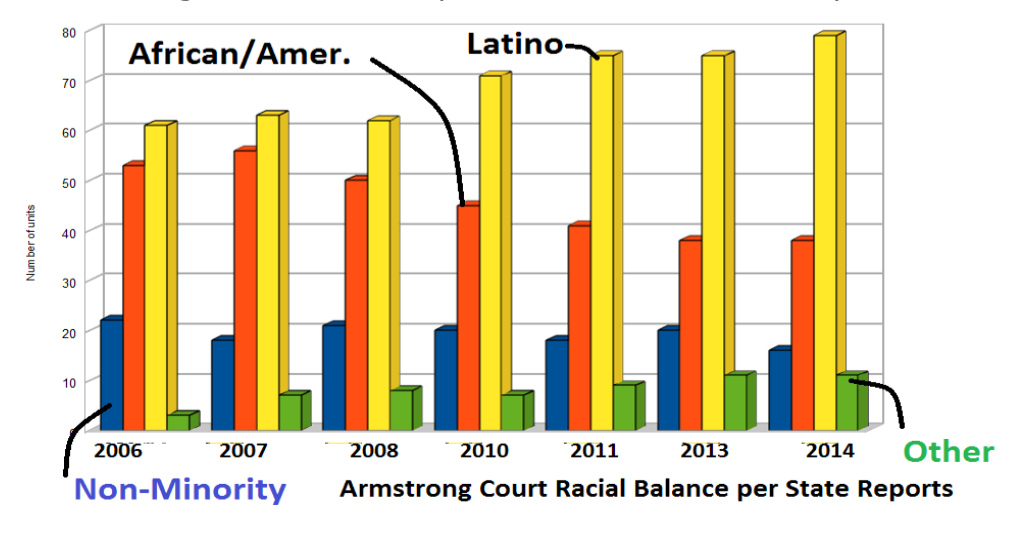 3. Census tract 105, better known as Chickahominy, already qualifies for environmental justice special treatment under law. If there are new tolls on the Turnpike, Hamilton Ave and the Post Road will suffer major impacts. Does adding 84 bedrooms to Armstrong Court help us solve the traffic and congestion? Will the legal precepts of environmental justice for poorer census tract draw the Dept of Justice into our elections, schools and park policy?

4. The Housing Authority is already coming to the Town BET asking for loan forgiveness at Parsonage Cottage, despite their charging $4300 a month for its units? Do we as a Town want to go forward this way, with tax-payers bearing the costs?

This is the only opportunity for the RTM to cast a vote for wise and sensible planning for the future – decades out in terms of its impacts. We urge the full RTM to reject the 84 bedroom increase in density. The Town’s requirement to meet State mandates needs to go back to the drawing board for a better answer. All districts of Town will end up bearing the brunt and cost of this ill-thought out proposal.

More information and detail is available at CCofGwch.org