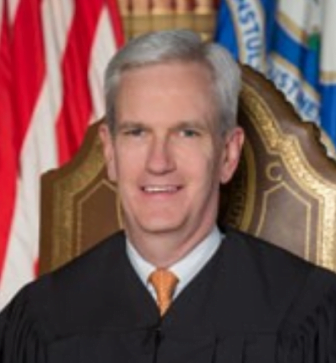 On Sept 26, 2018 Justice Andrew McDonald will give a speak at the Retired Men’s Association at First Presbyterian Church at 11:00am sharp.

Judicial independence is the concept that the judiciary should be independent from the other branches of government.

That is, courts should not be subject to improper influence from the other branches of government or from private or partisan interests. Judicial independence is important to the idea of separation of powers. This concept can be traced back to 18th-century England.

Different countries deal with this idea in different ways. Connecticut Supreme Court Justice Andrew J. McDonald will give his perspective on this important pillar of democracy.

In January of 2013, Governor Dannel P. Malloy nominated Justice McDonald to be an associate justice of the Connecticut Supreme Court, and he was confirmed by the Connecticut General Assembly later that month.

In addition to his service as an associate justice, Justice McDonald also serves as the Chairman of the Connecticut Criminal Justice Commission and as Chairman of the Rules Committee of the Superior Court.

From 1991 to 2011, Justice McDonald was engaged in the private practice of law with the firm of Pullman & Comley, LLC. He was a commercial litigator and handled all stages of litigation in federal and state courts at both the trial and appellate levels.

Prior to his appointment to the Supreme Court, Justice McDonald served as the General Counsel to the Office of the Governor for the State of Connecticut from 2011 to 2013

Justice McDonald and his husband, Charles, live in Stamford.