If you were coasting along a beach in Malibu, or even strolling down Sound Beach Avenue during the sunset, you would envision seeing yourself listening to a band of such mellow funk rock and jazz quality as is Freakpeace.

While it’s synonymous to class and definitely has impression in Greenwich history, I myself at least see little in the breakthrough Jazz community in Greenwich and neighboring towns. Most musicians who perform are playing very old written pieces, or rather very vanilla pieces. Most modern musicians don’t want to push the envelope anymore, or in the words of George Wein, promoter and creator of the Newport Jazz Festival, “Musicians now-a-days don’t understand the music itself; they’ve never heard it in definition.”

Freakpeace is the definition Mr. Wein acclaims and appraises. While not similar in old tyme original Jazz music of the early 60s, there is one thing Freakpeace does extremely well and that’s pushing the envelope on new zounds; the new music currently coming from Greenwich and the new sounds coming from the genre itself.

While their release of ‘Jungle Sauce’ is a small sample of their extensive work, it proves to be a powerful little sampling. The first track alone packs enough power and feeling to make any listener interested, Tomorrows Nostalgia, which comes up slowly, building emphasis as a song that you might listen to when you are questioning your world. After a minute, it breaks into the vocal section led by Percussionist, Nick Ditrio, which is unbelievably reminiscent of Don Henley’s sweet, flowing voice.

The song eventually breaks down into a very quiet, mellow section, with the guitarist, Henry Riccardi, leading all five members through their unique creative intuition. My favorite track, Spiders Journey, leads the way towards a more funky fresh Jazz piece, with most of the funky freshness belting out of the songs author and the Saxophonist, Vincent ‘Urbang-bang’-nowski.

With instant power from all members in the band, there is more here to say about the absolute un-parallel teamwork from Riccardi and Urbanowski in the ‘jam’ section of the song, before all five member wrap up the sound with a blunt ending. This is a song I can easily see myself waking up and listening to daily.

The last two tracks veer into two different directions entirely, with Fat Freddy sounding very hoppy, with pounce. I could see it being a fun treat to play for fans of the band.

Indrajal, the last track, proves that the funk aspect of the band knows no bounds and exceeds any expectations you might have had in the pure ‘funk’ genre this band possesses. This song is the sound of perseverance and reward, of all things as Bassist, Andre Parisi reflects on how intense the lead-out bass line was to play.

“It was definitely a challenge, I had to do a few takes with the band because I couldn’t play through it at first, but it was worth it in the end,” Parisi said.

If you’re an avid fan of doing the quiet, mellow pursuits of life, or an aficionado of dancing to some powerful, hopping funk tunes, or driving with your top open on a beautiful sunny day, then I know a little band called ‘Freakpeace’ and I think they might be just for you 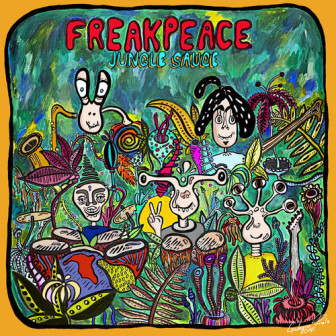 You can listen to the full album here