In support of October being Domestic Abuse Awareness Month, the Greenwich YWCA and the JCC hosted a recent screening of the docu-style flick, Tough Guise 2 (TG2).

TG2 delivered a blow to macho men, the NFL, tough guy movies, politicians, the media, the NRA, Hollywood, Madison Avenue, and even the Boy Scouts.

Because when it comes to Violence Against Women, Activist and the film’s creator, Jason Katz, believes society’s prevailing mindset of boys will be boys coupled with the media’s genderless coverage of crimes against women, have contributed to a systematic failure to focus on men as men.

And he’s got the statistics to back it up.

The movie also takes the media to task for not taking gender seriously when reporting on crimes against women.

“We call it “violence against women” as though nobody’s actually committing the violence, like it’s something bad that just happens to women – like the weather. They’re just experiencing it. The fact that men are responsible for somewhere around 98% of this violence simply evaporates.” Jason Katz

In contrast, when crimes committed by women are reported, the gender becomes the headline.

TG2 rolls out the theory that males grow up immersed in a society with an endless barrage of tough guy messages and violence directed towards them through video games, professional sports, television commercials and Hollywood movies like Rambo, Fight Club and Gran Torino, to name a few. 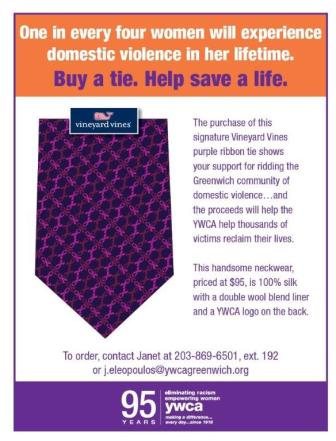 Vineyard Vines and the YWCA of Greenwich stand behind ridding Greenwich of Domestic Violence.

Exposure to these cultural ideals about manhood, TG2 says, teaches males the Guy Code –learned behavior on how to act tough and not show emotion in order to be one of the guys.

“Qualities like compassion, caring, empathy, intellectual curiosity, fear, vulnerability, even love – basic human qualities that boys have inside them every bit as much as girls do – get methodically driven out of them by a sexist and homophobic culture that labels these things “unmanly,” “feminine,” “womanly,” and “gay,” and teaches boys to avoid them at all costs.” Jason Katz

Even the animated movie, Shark Tales, has what Katz theorizes, is a classic example of the code being served-up in a scene between the young ‘vegetarian’  Shark, Lenny, and his dad, Don Lino, who can’t understand why Lenny won’t kill and eat.

“Lenny, you see something, you kill it, you eat it, period. That’s what sharks do. That’s a fine tradition. What’s the matter with you? Right here in front of me now, eat this!” – Don Lino, Shark Tales

For 25 years Jason Katz has been studying the causes of violence with a special focus on how cultural ideas about manhood contribute to interpersonal and relationship violence and also shape U.S. political culture. The movie Tough Guise 2 is the sequel to the original Tough Guise.

To view a trailer of Tough Guise 2: