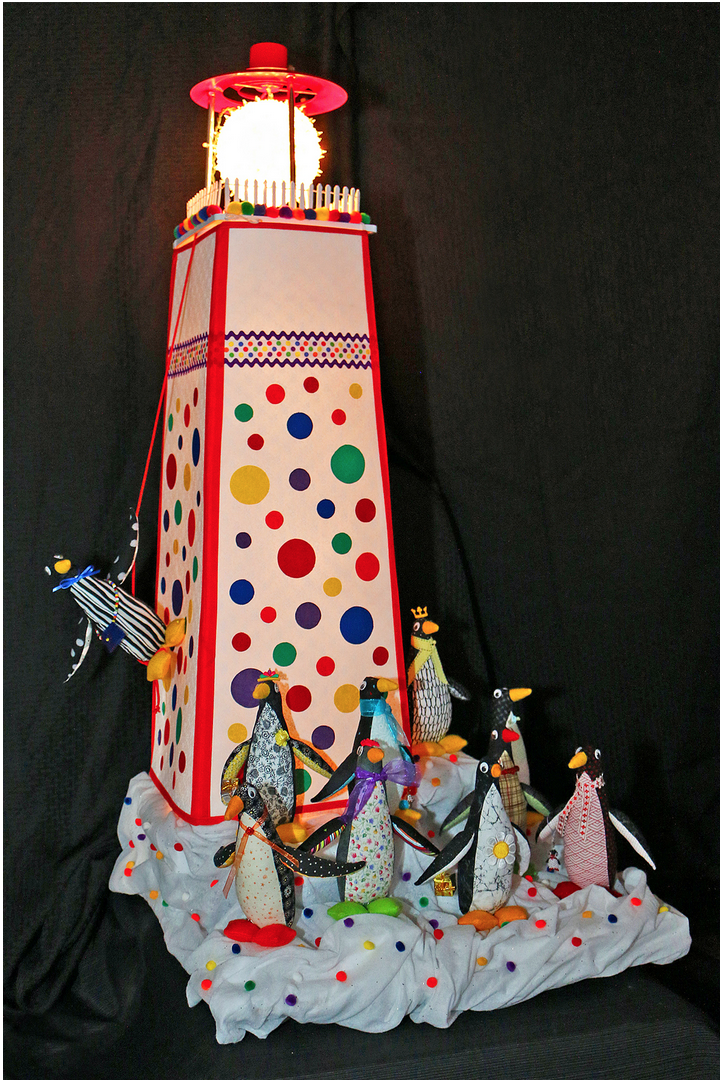 A particularly polka-dotted penguin lighthouse made by a Greenwich woman is vying for the $1,500 grand prize in The Maritime Aquarium at Norwalk’s 14th annual “Festival of Lighthouses Contest.”

“Penguin Party” by Margaret Phillips of Cos Cob is among the 22 creative handmade entries in the holiday display, open daily through Jan. 18 in the popular Connecticut family attraction.

The lighthouse contest works like a juried art show except that you and thousands of other Maritime Aquarium visitors are the jury. Visitors can follow the homemade beacons through the galleries and cast a vote for their favorite. The lighthouse that gets the most votes wins $1,500. There are cash awards for five runners-up too.

Seeing the lighthouses – and casting your vote – is free with Aquarium admission.

This year’s 22 lighthouses were built by local artists looking for a challenge, by hobbyists with a vision and by students fulfilling a school assignment. Some lighthouses are modeled after actual lighthouses; others are wildly whimsical.

“We’re as excited as anyone to see and display this year’s entries,” said Thomas Frankie, the Aquarium’s exhibits director. “We’re always amazed and honored by the thought, design and effort that our contestants put into these lighthouses, which add a festive glow to the Aquarium throughout the holidays.”

Rules of the “Festival of Lighthouses Contest” are kept to a minimum to allow for maximum creativity. Lighthouses must be 3 to 6 feet tall and have a working light, and may not include animal remains, such as shells. Beyond that, it’s up to the creators’ imaginations.

Phillips entered the contest for the first time last year and won $300 for fourth place. Her entry this year, “Penguin Party,” is a four-sided lighthouse lit from within, edged in red and colored with bright polka dots. It tapers up to a glistening crystal globe. At the lighthouse’s snowy-white fabric base (also playfully polka dotted) stand nine hand-sewn penguins, each with a breast made of different fabrics. A 10th penguin rappels down the lighthouse.

“The quality of the lighthouses goes up each year, as the contestants are forced to up their game each year,” Frankie said. “This in turn makes the contest better and more enjoyable to visit, but it also becomes harder and harder to vote for one favorite.”

Lighthouses in the 2015 contest are made out of everything from wood, paper and stone to playing cards, candies, fairy figures and paper cupcake liners.

For more details about Maritime Aquarium exhibits, IMAX movies and programs, call (203) 852-0700 or go to www.maritimeaquarium.org.