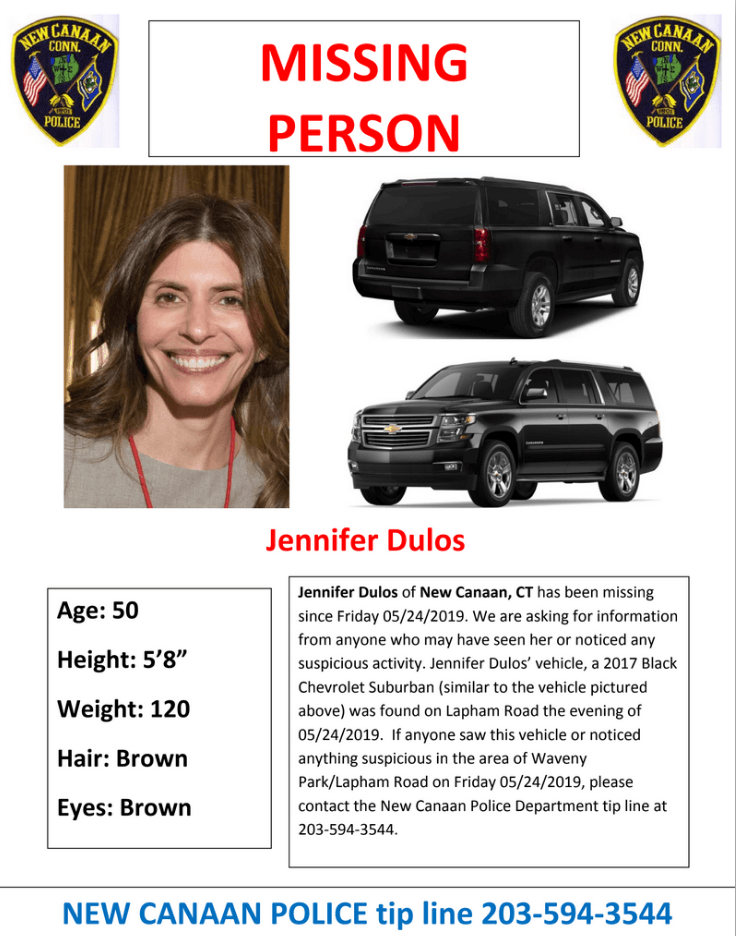 This article was written by Mike Dinan and published on sister site NewCanaanite.com

Police said Friday that they’re spending the morning handing out ‘Missing Person’ flyers for the New Canaan woman who disappeared one week ago.

Contrary to some published reports, investigators have not classified the missing person and criminal case as a homicide, according to New Canaan Police Lt. Jason Ferraro, the department’s public information officer.

Jennifer Dulos, 50, hasn’t been seen since dropping her kids off at school on May 24, according to police. Friends reported her missing to police at about 7:30 p.m. that night, and authorities found her black SUV parked on Lapham Road near Waveny.

At the time of her disappearance, Jennifer Dulos had been entangled for nearly two years in a bitter divorce and custody dispute with her estranged husband. In divorce filings, she described Fitos Dulos as aggressive and dangerous—charges he has denied. Her mother within one year of the divorce filed a civil lawsuit claiming that Fitos Dulos, a builder based in Farmington, owes the family some $2.5 million in loans.

Police said Wednesday that they’ve launched a criminal investigation into Jennifer Dulos’s disappearance, running with the active missing person investigation already underway. The mother of five has been described as extremely kind and focused on her five children by some locals who know her.