The Elm Street bump out was recently completed and celebrated with a ribbon cutting ceremony.

The idea is to enhance Greenwich Avenue, increase pedestrian safety by reducing the distance a pedestrian has to cross, improve sight lines and slow down cars.

According to DPW communications specialist Renee Wallace, the website was created to invite feedback from the public.

Each intersection has a “provide feedback” button. Name and email address are optional.

For a century, Greenwich Police officers were stationed at the intersections to direct traffic. Many longtime residents were disappointed to see them go.

An RTM Sense of the meeting Resolution to restore the police failed. (The vote was 81 in favor, 127 opposed and 7 abstentions.)

Camillo said having officers direct traffic was “a terrible waste of great talent” and officers have been redeployed to plainclothes beats and bicycle patrols.

The idea of the bumpouts is to decrease the crosswalk distance from curb to curb, to make the intersection safer for pedestrians.

Some drivers say they prefer the bumpouts because it takes less time to drive across the intersection than when there was an officer directing traffic.

Others say that without a police officer, there are a lot of horns honking and it is difficult to keep track of whose turn it is, especially when pedestrians have their heads in their cell phones.

“We’re going to have members associated with the Dept of Public Works walking up and down handing out information and soliciting comments, starting today.” 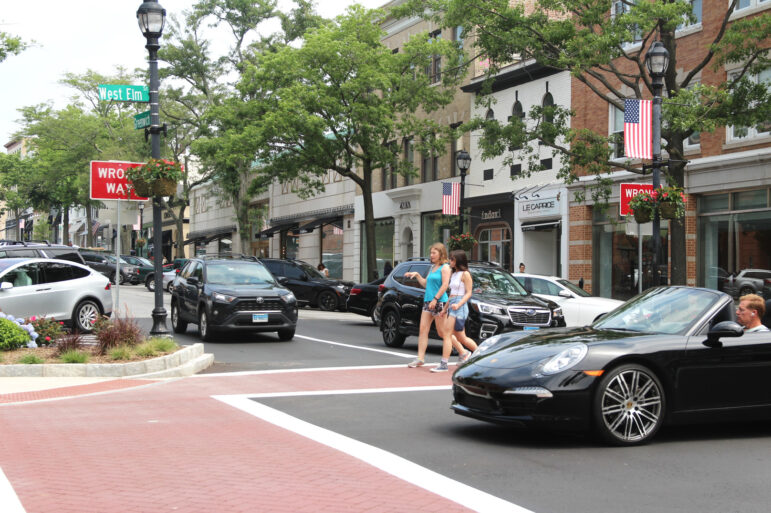 Completed bump-out
at intersection of
Greenwich Ave
and Elm Street. 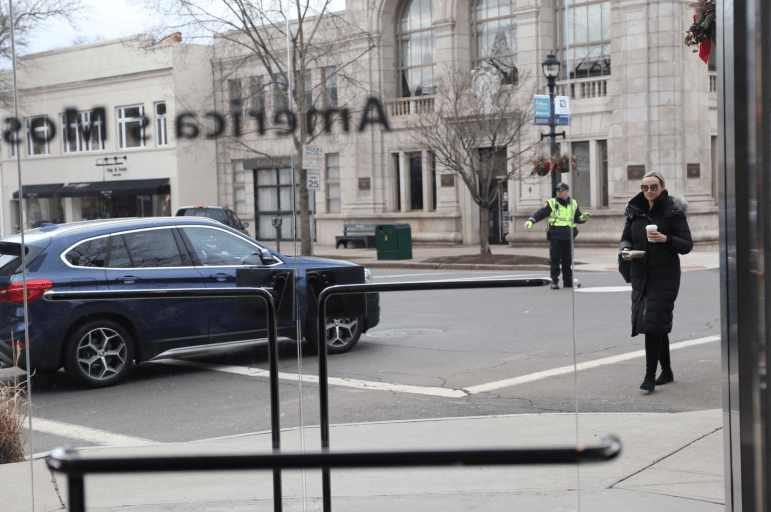 “We’re going to be soliciting feedback from everybody – residents and merchants,” Camillo said at Thursday’s Board of Selectmen meeting, where the board voted to approve a draft policy from assistant town attorney Aamina Ahmad intended to prevent future snafus over ADA compliance.

One issue that arose from the Elm St bump out was an ADA grievance appeal filed by Alan Gunzburg, from the First Selectman’s Committee for People with Disabilities.

The grievance was about a mature tree that was posted for removal to make way for an ADA ramp connecting an an accessible parking space to the sidewalk.

The tree warden Dr. Greg Kramer had ruled that the tree could come out to make room for the ADA parking space, but the decision was challenged in court.

Ms Ahmad said, “As a result of the court process, the DPW folks did a slight redesign of the intersection so the tree could remain and the parking space was moved across the street.”

Ahmad explained that Mr. Gunzburg filed the grievance with Demetria Nelson, the head of Human Services, who in turn interviewed the tree warden Dr. Greg Kramer, DPW deputy commissioner Jim Michel and Mr. Gunzburg, and issued a ruling stating there had not been any violation under Title 2 under the Americans with Disabilities Act.

“Mr. Gunzburg, as is his right under the procedure, then asked the Board of Selectmen to hear his appeal, and his disagreement with Ms Nelson’s decision,” Ahmad said.

Ahmad drafted a decision on behalf of the Selectmen.

The recommendation was to have a more collaborative approach at the beginning of future projects that involve ADA compliance.

“When there are those issues and potential for any type of conflict that’s looked at right up front with the various stakeholders so it doesn’t become an issue at the very end, as it did here, where Mr. Gunzburg found out this tree was going to remain and the parking space was going to be moved across the street,” Ahmad said, adding that as for the Elm Street bumpout, the town was not in violation of Title 2 of the ADA.

“Part of the recommendation is we can’t unilaterally take away the duties of the tree warden,” Camillo said. “We want to make sure we’re all there at the table. We’re not just talking about parking spaces. It would be sidewalks and any other public areas where there is an ADA issue.”

“I’m extremely concerned that the assistant town attorney Aamina Ahmad did notfollow her own decision that she put forth in the hearing,” Gunzburg said. “As she stated, the federal ADA law supersedes state law. This limits the influence a tree warden has over trees impeding Title 2 access, which makes them no longer part of the tree warden’s job.”

“I will also be the first person to file a federal complaint if a public hearing is held regarding any trees in federally mandated right of way,” Gunzburg added.

Ms Ahmad responded by saying there are both ADA law and tree warden statutes.

“On one hand the Town of Greenwich will comply with Title 2 of ADA. But on the other hand, you also have a state statutory procedure which authorizes the tree warden to do certain things with regard to trees in the public right of way and on town property,” she said, adding that the public also has rights under those statutes.

“I don’t think the rights granted through this old statute written in the 1950s really have any merit today,” he added. “When we start to put notices on trees and have tree hearings for tree hearings in the way of progress, the ability for people to traverse the sidewalks, to cross streets and enter buildings and you allow the public to give their opinions, we are setting ourselves up for a long term time with legal issues.”

“There are plenty of trees, if you ask Jim Michel, plenty of trees in a sidewalk, we could go through the whole list that DPW has,” Gunzburg said. “When the tree warden decides to post a tree for public comment, federal complaints will be made.”

Select person Jill Oberlander she had not seen the plans for future bumpouts on the Avenue, and wondered if they would require removal of any trees.

Select woman Lauren Rabin said the tree warden does not necessarily have to post a tree for removal if there is an issue of safety.

“And we’re all in agreement that accessibility is a safety issue,” she said.

On the topic of trees that might be in the path of upgrades, Ms Wallace, the DPW communications specialist, said in her email on Friday that DPW is still in the conceptual stages and each intersection will be evaluated as the team further develops these concepts.

Priorities for Police Presence on Greenwich Avenue Debated at RTM