On Saturday, December 14, from 10:00am to 11:30am, there will be a speaking engagement with United Nations Environmental Programme Assistant Secretary-General Satya Tripathi in the Greenwich High School Performing Arts Center.

This event is meant to follow the successful Beach Clean-Up event 3 weeks ago at Tod’s Point to honor Luke Meyers who has since passed away.

The event has been organized by Greenwich High School’s Model UN Club and Environmental Action Club. 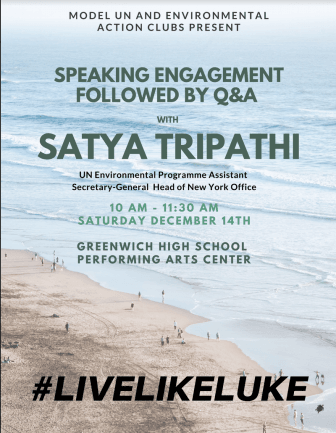 Mr. Tripathi,  a development economist, is the UN Assistant Secretary-General and the Head of the New York Office of the UNEP.

He has an academic background in both economics and law and has been serving at the UN for over 20 years.

During his time at the United Nations, Tripathi has led the committee in charge of facilitating peace talks in Cyprus and taken part in numerous international post-disaster recovery projects.

Read more about Mr. Tripathi’s service for the UN here.

Both students and families are encouraged to come and learn about the environment and the UN’s efforts on this issue with a leading expert in the field.