Our ever popular Sunday Afternoons Live concert series concludes on Sunday, February 23 at 4:00 pm with Music of Bach’s Time and Our Time, featuring Masayuki Maki on harpsichord. Tickets are $20/person (available at the door), and all school-aged youth are free.

This program will present harpsichord music composed by J. S. Bach, his teacher Georg Böhm, and his son, C. P. E. Bach, and, at the same time, you will hear harpsichord music composed by our contemporaries, such as the Dutch composer Louis Andriessen and the Japanese composer Toru Takemitsu.  Hearing the music from the old and new, the east and west, do you think the music is changed by time and space, or is our perception of them changed by music?

A multi-instrumentalist on various classical keyboard instruments, Masayuki Maki has extensive experience in lecturing and performing in America and Asia.  He is currently an adjunct faculty member at the Aaron Copland School of Music at Queens College of the City University of New York.  Maki often performs in prestigious concert venues such as Carnegie Hall, Forbidden City Concert Hall (China), and Suntory Hall (Japan), and regularly works at the Metropolitan Opera and New York City Opera as harpsichord technician, and is currently completing his doctorate in harpsichord at Stony Brook where he is also Assistant Director of the Stony Brook Opera. 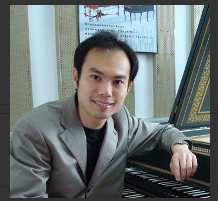 This concert will be held in the beautiful setting of our historic Meetinghouse at First Church, complete with coffee, tea and light snacks.  Our Sunday Afternoons Live season, this year, has been gratefully underwritten by the late Stella Miazga, a non-church member who attended our concerts and generously bequeathed funds to support the series after her death.

The concert is February 23 at 4:00 pm in the Meetinghouse of First Congregational Church of Greenwich, 108 Sound Beach Avenue, Old Greenwich (across from Binney Park).