This week a 21-year-old from Greenwich attending Chapman University in Orange, CA, was arrested after a rant featuring profanity and racial slurs was caught on camera and went viral on social media.

During the Feb 4 incident Dayton Kingery, 21, a graduate of Brunswick School in Greenwich, acknowledges having been drinking rum all day before launching into the rant recorded on video and shared on Twitter. “I’m drunk, I need help,” he can be heard saying.” 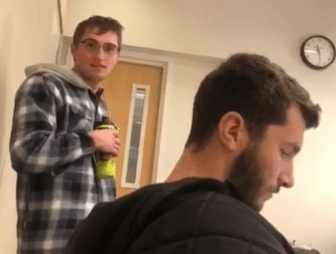 Screenshot of Kingery in video of racist homophobic rant that went viral.

Later, after classmates ask Kingery to leave and he moves toward the door, a student asks his name. After identifying himself, Kingery adds, “Don’t say my name. You don’t know who I am, guy. …I’m worth like $50 million.” 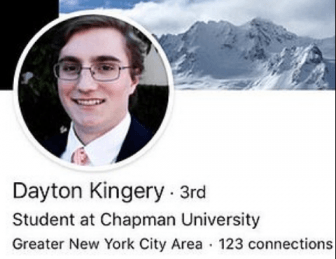 A longer video includes classmates ushering Kingery into the hallway and tossing him what they believed to be his  backpack.

Kingery can be seen tossing the backpack down the hall before running toward it and stomping on it, saying it was not his.

In the last few seconds of video, there is footage of Kingery, restrained by his wrists and ankles, being carried down the sidewalk by officers as a witness gasps in disbelief.

Kingery was charged with felony vandalism for stomping on the backpack containing a laptop, resisting arrest, making criminal threats, and elder abuse for allegedly assaulting a campus security guard who is over 65.

Internet searches for images of Kingery feature him as a teen volunteering in a Tanzanian farm field with native children.

While not mentioning Kingery by name, Philip’s message says, “While the alumnus is almost four years out of Brunswick, this episode shows us once again that words and actions matter and reflect not only on the person making the statement/inciting the actions, but also on all with whom he is associated…Brunswick seeks to promote respect for everyone and has zero tolerance for hateful speech or behavior of any kind.”

Chapman University president Daniele Struppa posted a statement on Facebook apologizing to the Black and LGBTQIA communities who were specifically targeted in the incident.

Without mentioning Kingery by name, Struppa said racist and homophobic conduct will not be tolerated on campus.

In an update, Struppa said, “The individual responsible for this incident is no longer a student at Chapman University.”

Kingery was released from police custody on bond on Feb 5.