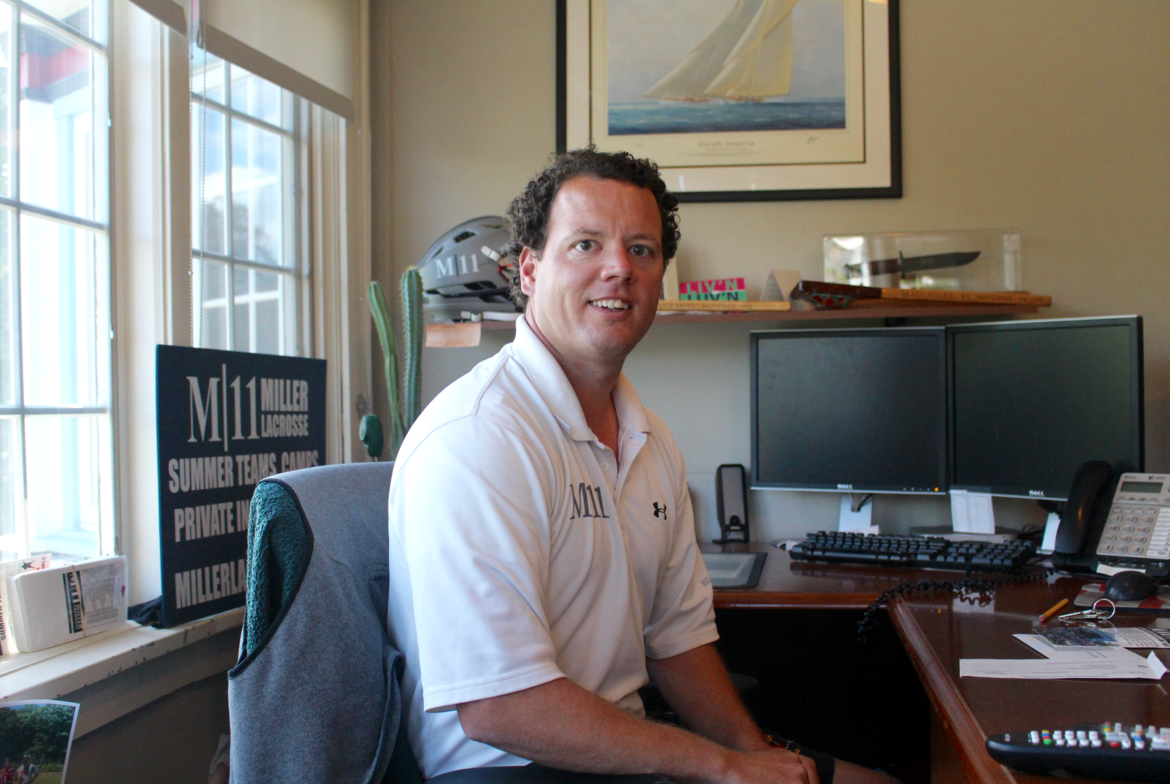 By now most people in Greenwich recognize Brady Miller’s game trailer, emblazoned with the M11 Lacrosse logo. But what exactly is inside?

We sat down with Mr. Miller in his office on Field Point Road to learn about M11, which he explained is shorthand for the Miller siblings – all 11 of them. “My mom was an only child,” said Miller who grew up in Manhasset on Long Island. “Same parents, no twins,” he said.

“All my siblings were very involved in lacrosse,” said Miller who went on to graduate from Towson University in Maryland and played professionally for a couple years on the Philadelphia Barrage, though that team ceased operation in 2009. 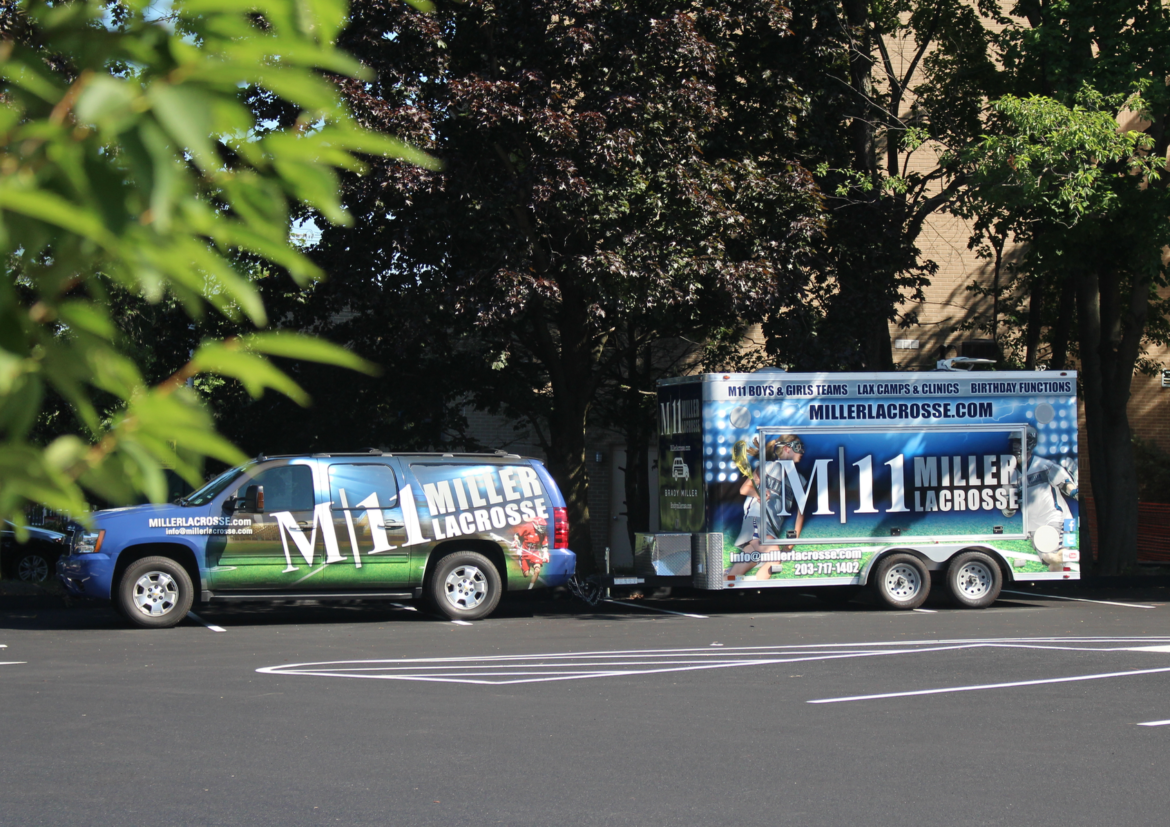 “The wings open up and there are TVs inside,” Mr. Miller explained. We do a lot of kids’ parties where they can play an hour of  flag football, soccer or lacrosse, and then go in side the trailer for games and entertainment.”

Depending on numbers, the kids can break into two groups, with one in the game trailer while the other plays a sport. After an hour they switch.

“Others were offering game trailers,” Miller said. “But we offer an hour of sports instruction and an opportunity for boys and girls to get some exercise with their friends doing the sport of their choice.” 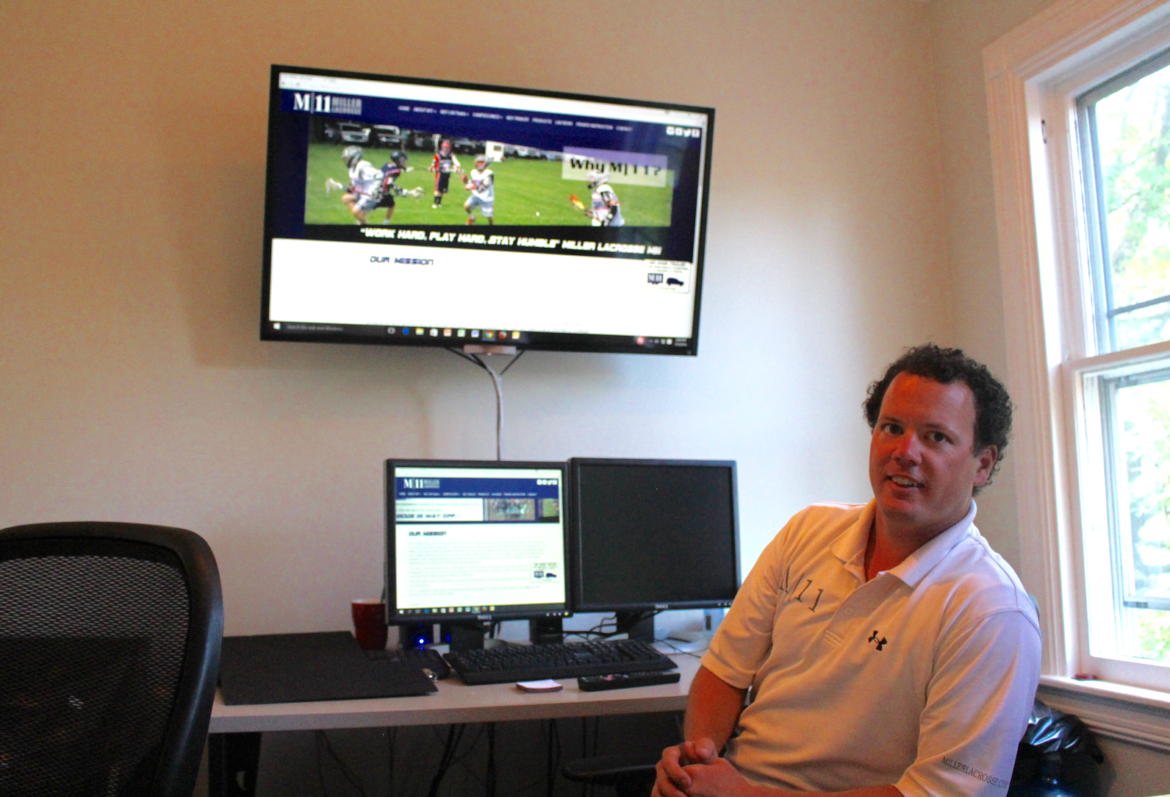 Miller, who has donated visits with the trailer to local non-profits like the Boys & Girls Club of Greenwich and as charity silent auction prizes, said this is the trailer’s third summer.

Miller, who also volunteers at Greenwich Youth Lacrosse where he coaches the 5th grade A team, said parties can either be at a family’s home or on a Town field.

“I take care of getting the fields,” he said, adding that families are pleased that his staff and coaches include students and alumni from Greenwich Academy, Brunswick, and Greenwich High School.

“My big thing is having the local kids and having a community feel,” he said. “Our coaches come through the GYL pipeline.”

“Parents like it because the clinics have small groups, it’s local and they’re still paying lacrosse.” 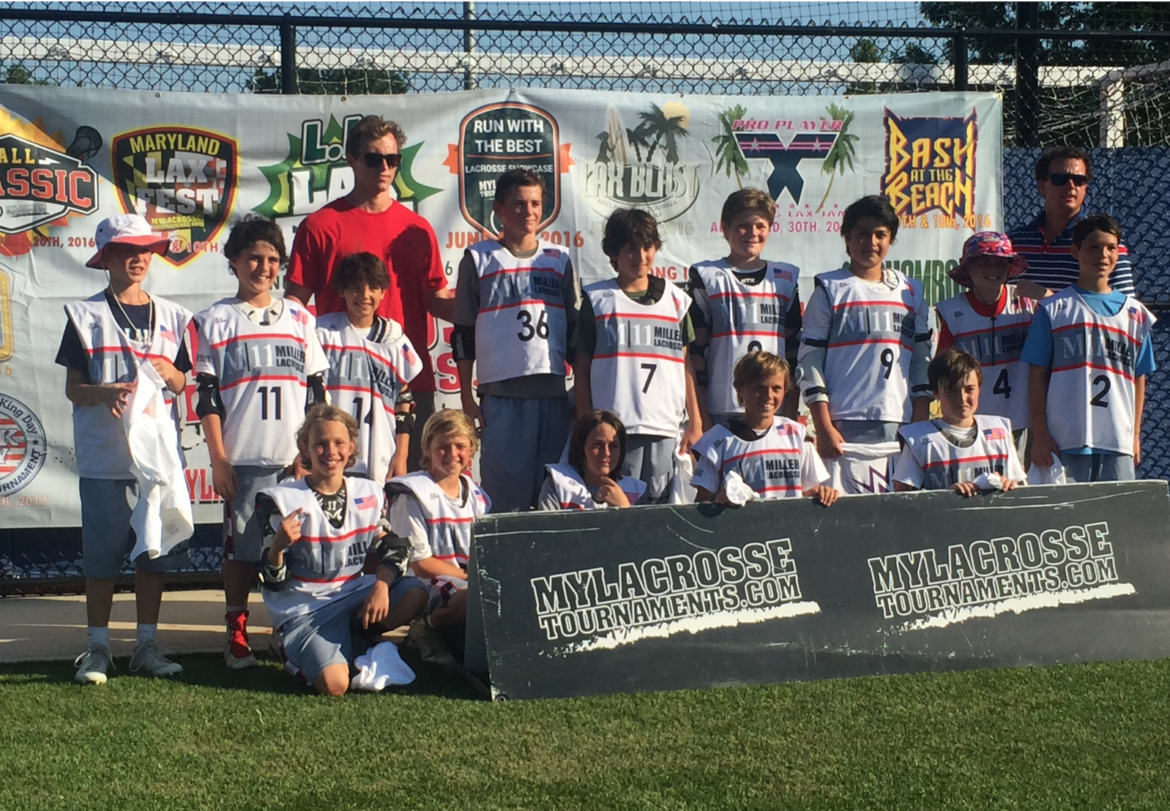 Boys and Girls Summer Lacrosse Teams
Another key feature of M11 Miller lacrosse are its summer teams, which focus on developing youth players for the next level. Miller said a couple weeks earlier, at the Westchester War Games, a one-day tournament, his team had a victory. The format is that four games are played. If a team wins, they get to play two more games. “The beauty of it is there is no travel involved,” Miller said.

Fun Camps
M11 Miller Lacrosse also offers one-week camps in Martha’s Vineyard, Nantucket, Montauk and the Hamptons. The camps run inthe mornings for 2-1/2 hours. “It gives the parents some free time,” Miller said, adding that some families are vacationing in those destinations, others are local kids. The one-week camps started six years ago, and now include a camp at North Street School.

All M11 Miller Lacrosse programming is targeted to kids grades 3-8.

“What’s unique is that everything is local and tailored to the youth player,” he said, contrasting his concept with other groups that emphasize competition and take kids as far away as Vermont or Maryland. And, as with any travel team, families are required to drive, stay in a hotel and eat meals out.

“My philosophy is you simply do not need to travel,” he said. “We’re in the mecca of lacrosse here. You’re still getting in four hour games a day and then you go home that night,” he said, referring to his summer boys and girls teams. “We’re teaching the same things as them, and our kids are having a lot of fun.”

“We’re all about summer, winter and fall,” he said, adding that in the spring he conducts small group clinics. For example, because Greenwich Academy and Brunswick have half day Fridays, Miller will visit those schools in the afternoon.

Private Instruction
M11 Miller Lacrosse also offers private instruction. In fact, that is how the business began. “I was getting six or seven kids for private instruction back to back on weekends,” Miller said. “I left a job in finance and realized I had an opportunity to take my love of lacrosse and make it into something larger.”

Looping back to his popular kids parties with the gaming trailer, Miller said, “I’ll make it work for you at the location of your choice. We can put the trailer in the driveway and the kids can play in the back yard. “It’s whatever the kids want to do,” he said.