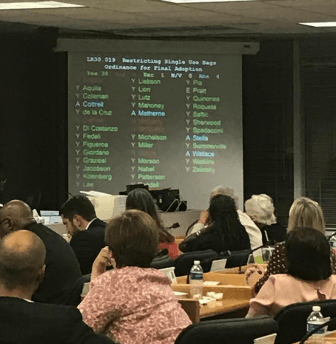 On Monday night the Board of Representatives in Stamford voted to implement a plastic bag ban.

This means Stamford joins Westport and Greenwich in banning single use plastic bags.

Stamford’s plastic bag ban is unique from Greenwich’s in that there will be a 10¢ fee for each recyclable paper bag.

This is the first locality in Connecticut to also charge for paper.

The ordinance calls for the paper bags be 100% recyclable and contain at least 40% recycled content. The bags must also conspicuously display wording suggesting the bag gets recycled.

The ban goes into effect in six months.

“BYOGreenwich was thrilled tonight to support our neighbors to the north, Stamford, in their pursuit of a plastic bag ban,” said Jeanine Getz of BYOGreenwich on Monday night.

“It was a two-hour healthy, respectful discussion with an audience in full favor of the ordinance,” Getz continued. “Each plastic pollution ordinance that is passed is a win for better city and town resource management and a healthier environment for present and future generations of businesses and families.”

That night, Scott Mitchell, who owns Richards on Greenwich Avenue in Greenwich, and Mitchells in Westport, urged the RTM to approve the ban with a fee for paper bags. “It’s best to reward or punish,” he said.

Mr. Mitchell warned that unless there is a fee, there will be no change in behavior.

In the end the RTM declined to pass the ordinance with a fee for paper bags.

BYOGreenwich’s Jeanine Getz said she thought a sunset provision was a good idea, as it would provide an opportunity to reassess the ordinance.